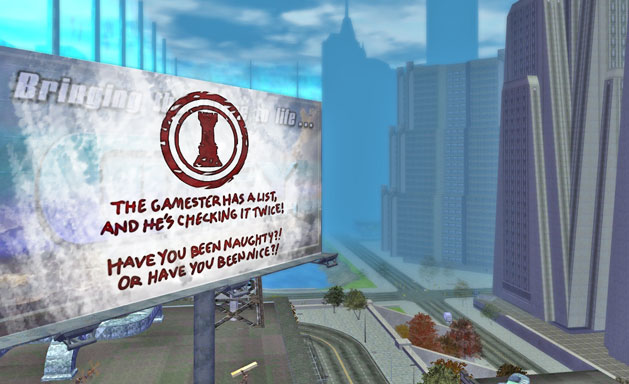 One of the many vandalized billboards

PARAGON CITY, RI, Dec. 19, 2005 – Paragon City awoke this morning to disturbing signs of a trickster planting “holiday gifts” throughout our fair city. Several billboards were spotted that had been vandalized - their proper images covered with a menacing logo of a red rook, and sporting the message:

A matching logo appeared on thousands of pamphlets that were scattered in Atlas Park and Galaxy city, and were even plastered all over the Arenas.

The message appears to relate to a pirate broadcast that broke across all of Paragon City’s radio frequencies early this morning at 6:00 a.m. (EST). The transmission, which lasted for approximately one minute, was an unidentified male voice:

Hello holiday revelers! I interrupt your regularly scheduled program to bring you, drum roll please, the holiday event you have all been

waiting for! That's right ladies and gentlemen, I have created the grandest game ever played!

Have you been naughty?! Or have you been nice?! Come find out what fate has in store for you! Tear open as many presents as you dare and unleash their inner secrets. Maybe you will win a fantabulous surprise! But beware, you may also be dealt a dangerous blow from an old winter friend! Its all part of the Gamester’s Holiday Festival of Fun!

The broadcast ended with hysterical laughter, which slowly faded into static before regular broadcasting resumed.

There have also been several unconfirmed reports of large “presents” - packages decorated with holiday wrapping paper - spotted on rooftops and in alleyways. Citizens should be wary of such devices and report them to the PPD or your local neighborhood registered hero at once.