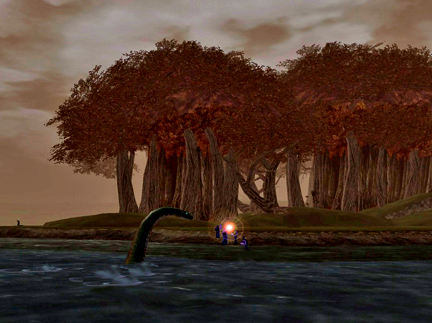 The truth about Salamanca’s Lake Monster

When a spokesperson from the People for the Humane and Non-violent Treatment of Monsters (PHANTOM) called me to protest the FBSA’s official recognition of the Salamanca Lake Monster as a threat, I was polite enough. “But Sally is a benign plesiosaur!” she implored. I thanked her for the info and that was that. There were simply more pressing matters at hand. The Sally problem was a page 12 footnote at best. Paragon Tattler fluff.

And then Skipper LeGrange showed up. Author, folklorist, parapsychologist, and cryptozoologist, Skipper never met a phenomenon he wouldn’t pursue. “We have to stop them from saving Sally,” he said, shaking his pony-tailed head.

This wasn’t the Skipper I knew. His past efforts at protecting other famous aquatic monsters—among them, British Columbia’s Ogopogo, Lake Champlain’s Champ, Oklahoma’s “Killer” Octopus, and Lake Superior's Pressie—were legendary. His 1999 book on the subject, Devil in the Deep: Lake Monsters throughout History, is considered a classic. And he was, after all, PHANTOM’s most famous advocate. I noticed he wasn’t wearing his over-sized PHANTOM button. I asked him what the big deal was.

He pushed up his glasses. “Big deal? Look man, you don’t understand. This really pains me, but like I told the FBSA, Sally has become a threat. Man, I can’t believe I’m saying this…but she has to be stopped. Destroyed!”

My journalistic curiosity was piqued. While I’ve never known Skipper to be completely rational, his madness usually had a method. If Skipper thought Sally was a threat, there had to be more to the story than mere speculation.

“We have to go up there,” he said, folding his arms across his chest. “We need to document the truth.” It was a command, one that I knew I couldn’t refuse.

And that’s why, two days later, I found myself on the Salamanca docks, shivering in the pre-dawn darkness with a troubled Mayor Bower, who kept muttering: “I don’t know about this.” I stared out into the mist-shrouded lake, wondering where Skipper LeGrange was and whether we should have invited the whole Freedom Phalanx to join us. I have to admit, I would have been glad for some heroic company.

We heard the deep growl of motors from the distance. Through the fog and darkness, haloed lights floated towards us. Easing to a purr alongside the dock, Skipper waved from the flying bridge of the Scylla, his 47-foot Grand Banks Eastbay. From the stern mast fluttered a ragged Jolly Roger. “Ready?” he called out.

Skipper climbed down to the deck and gave me an old army issue jacket, a life preserver, and a camo boonie hat. He was wearing a dark-blue tactical vest over a faded flightsuit and what appeared to be infrared night gear strapped to his head. He inspected me and sighed: “Man, at least ditch the damn tie.”

He patted the boat’s railing. “Last time you saw the Scylla was during that Ghost Ship investigation. I’ve modified her even more.” I told him that his books must be doing well. But how did he get the Scylla here? You can’t just drive up here with a cruiser in tow. “Airlift,” he said as we climbed up to the flying bridge. “Buddy of mine has a modified Chinook he loans me from time to time.”

We waved at a frowning Mayor Bower, who called out: “I don’t know about this, boys! If you don’t return in 24 hours—“

Skipper saluted. “Never fear!” And with that, he nudged the

see Monster on page 7B

continued from page 7A

throttles in reverse and slipped away from the dock. Soon we were wrapped in swirling cold fog. The whole world was damp and muffled. Skipper pointed to the high-tech dash display that wrapped around the bridge. “Got new wide-band radar, forward and side-scanning sonar, and HD digital video fore and aft. Put in twin 700hp diesels that will do 30+ knots easy.” I asked him, half in jest, where the weapons system was located. His smile, in the dim glow of the dash, looked faintly sinister. “That’s classified.”

We headed north with our running lights off. “There’s an island to starboard,” he said. “We’ll want to stay away and out in deep water.” The fog began to thin as we came abreast of the small wooded island. To the east, the sky was turning to pale slate. Skipper elbowed me and offered the night vision. “See them?” Lit in bright greens and reds, large antlered Tuatha de Dannon huntsmen shambled down to the island’s shore. “They won’t come out too far,” Skipper said. “Still, there’s trouble all around us. Tuatha mostly in the Misty Wood. Fir Bolgs out from New Connaught. The Cabal up in Sunset Ridge, the Grim Vale and the Broken Teeth. Red Caps everywhere.”

There was ominous lightning to the northeast, with faint thunder following. Skipper looked up from his displays. “The Cabal and Red Caps are having a little tussle. This whole Croatoa thing is real bad karma.”

As one of his sensors began beeping, Skipper hunched over the LCD screen and started tapping keys. “A blip on the sonar, heading north.” He looked up towards the bow. “Maybe nothing. It’s deep here and the thermocline is wonky.” After a bit of uneventful sailing, Skipper slowed the Scylla and came to a dead stop about 500 yards southwest of a much larger island. He handed me a large pair of binoculars. “We’ll wait and see what happens.” He slumped into the captain’s chair and tossed me a granola bar.

As night gave way to a sullen dawn, the silence that enveloped us was oppressive. The lake was utterly still, its water like dark glass. Off in the distance along the Misty Wood, small balls of light floated through the trees. I was about to comment on the lights when the displays on the bridge’s dash all began to beep

and buzz. “Hold on!” Skipper yelled as the Scylla suddenly heaved upwards. Skipper staggered to his feet, checked his video cameras, and brought binoculars to his eyes. I followed suit. Along the island’s western shore, a group of Red Caps had gathered by the water‘s edge. They seemed to be dancing. As the water offshore began to roil and churn, the Red Caps’ dancing became frantic. A reptilian head emerged from the lake, followed by a long sinuous neck. Sally did look like a plesiosaur. As she swam closer to the Red Caps, she became agitated, tossing her head to and fro. A sickly green light emanated from the Red Caps and Sally roared. Several of the Cabal dropped from the sky and began attacking the Red Caps. Sally lunged forward and tore hungrily into the fragile witches.

“Damn Red Caps,” Skipper said, cranking up the Scylla’s twin diesels and turning the wheel hard left. “They’re corrupting her! Turning her into a weapon!” Sally’s head suddenly turned our way, roaring. She submerged. “Oh, crap!” Skipper jammed the throttles forward, lifting the Scylla’s bow out of the water and making the Jolly Roger crack like gunshots. Holding on tight, I asked how fast Sally could swim. “Hopefully less than 30 knots,” Skipper replied. Sally’s head appeared about 100 yards to our stern, closing fast. She bit at the water, and I could see rows of serrated teeth.

Sally submerged once more. “Hit the big green button,” Skipper ordered. “Below the video screens.” I hit it and two football-sized pods, trailing wires, blew off the sides of the boat. “Countermeasures,” Skipper yelled. “Figure Sally uses a kind of bio-sonar. The pods send false sonar-reflective images of our boat. Hopefully it’ll confuse her.” I asked him what the red button next to it was. “Depth charges,” he said matter-of-factly.

We pounded our way southwards in a fine bow-wash of frigid lake water. In time, through tattered fog and brightening day, I could see the village coming into view. My shoulders slumped. I glanced back. No sign of Sally.

Once docked, Skipper and I took a silent moment to reflect on our experience. “Well, that was interesting,” Skipper said finally. And then he grimaced. “She’s being transformed into a true monster. We can’t save her. She has to be defeated.” I looked out over the lake and felt a pang of sadness. This once beautiful area was slowly turning into a nightmare. Skipper told me he was staying to monitor the situation. I nodded, my eyes lingering on the lake; I hoped Sally would find the peace she so deserved.