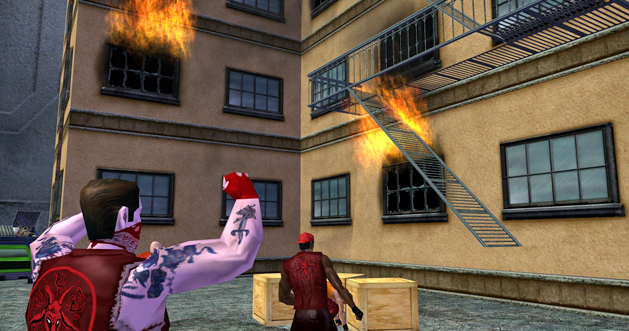 ATLAS PARK, August 10 , 2005 — City officials are beginning to take notice of an alarming increase in suspicious structure fires throughout Steel Canyon. One senior official, who wished to remain anonymous, voiced his concern over the incidents and the lack of fire protection for the city in general. “Since the Rikti War our firefighting capabilities have dwindled to the point where any fire bigger than a burning house is going to cause major damage and loss of life. We simply don’t have the trained personnel, the equipment, or the budget to adequately service the city. Truth be told, if we don’t enlist the help of heroes, these fires will spread far beyond the capacity of our fire department to deal with.”

Mayor Morales, in a special press conference held yesterday at City Hall, told the press that while force reductions and budget redistributions have occurred, the city and its citizens are not in any danger. “We have a proud firefighting tradition in Paragon City that goes back to the 1830s — and that tradition of exemplary service continues. While the Rikti War had a profound and debilitating effect on all city services, we are making every effort to restore our city to its pre-war status. In accordance with this effort, with Fire Chief Hopkins’ consent, we have authorized a volunteer firefighter certification for any hero who comes to the aid of the city’s fire department. We will provide these volunteers with special fire extinguishing equipment, official badges, and training to support our emergency services. With heroes acting as an auxiliary, the city will

be more than adequately prepared for any contingency.”

Fire Chief Hopkins added, “The fires that have occurred recently in Steel Canyon are under investigation. There is, however, evidence that they were premeditated and initiated for reasons unknown by a local criminal gang. It is also important to bear in mind that these may not be the end of such events. Until the fire department is back to full operational levels, we urge all heroes to stay alert and come to our aid when needed.”

When asked if the Hellions were behind these suspicious fires, both the mayor and Chief Hopkins told the Times that they could not divulge details about a current investigation. However, confidential sources within the FBSA Intelligence community have confirmed the Hellions’ involvement. These sources supplied the Times with exclusive photos of the most recent fire. “From the Hellions we’ve managed to question, we gather that they’re making a big push to assert their dominance and gain recognition among their criminal peers,” one confidential source told the Times. “Long considered a ‘second-rate’ gang, it looks like the Hellions intend on becoming a force to reckon with—even if they have to burn the city down around themselves to achieve this end. One Hellion prisoner summed it up, ‘We are the Hellions and we will burn this city to the ground. You will learn to fear us.’”

Officially, all FBSA members, heroes, and Super Groups have been asked to maintain a careful watch for any criminal gang activity and suspicious fires in the afflicted city zone. The Paragon Times will continue to investigate this ongoing situation.