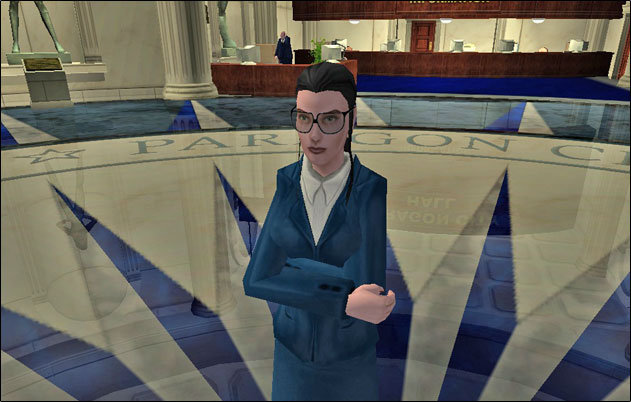 ATLAS PARK, CITY HALL, June 1, 2005 — For this, the first of an ongoing special feature about the various governmental, law enforcement, civil, and military contacts that heroes encounter throughout the city, the Paragon Times received unprecedented access to personnel files, official records, and extensive candid interviews. More than mere contacts for heroes, these dedicated citizens are an integral part of Paragon City’s line of defense—they make up the solid security infrastructure that supports and coordinates our heroes in the continuing war against crime and lawlessness. The Paragon Times is honored to tell their stories.

She stands alone amidst the hustle and bustle of City Hall’s spacious lobby. An official representative of both the city’s public image and its classified inner workings, she’s known simply as “City Representative.” Behind this official title is 29 year-old Brighid Moreira, and she’s one of the primary contacts working to bring together the city’s protectors and the Federal Bureau of Super-powered Affairs (FBSA).

Though at first glance Ms. Moreira is rather unassuming and even officious in appearance—a typical governmental bureaucrat—a quick perusal of her credentials and her official duties would indicate an extensive knowledge of and experience with law

enforcement and the intelligence community. To say that this City Representative is uniquely suited for her job would be only half the story. In a rare moment of, as she put it, “down-time,” Ms. Moreira graciously opened her City Hall office to the Times and agreed to tell a little about herself and her official position.

“The Office of City Representative has a long and, unfortunately, rather seedy history in Paragon City,” Ms. Moreira began. “It’s been largely ceremonial in nature for much of its existence. Beginning in the late 19th Century, the City Representative was nothing more than a glorified secretary for the mayor’s office. Scheduling appointments, organizing events and functions, dealing with the press—many of the City Representative’s duties also involved backroom public relations.”

It should be noted that Ms. Moreira is only the third woman to occupy the position in more than one hundred years. When asked about this, Ms. Moreira said that it wasn’t difficult to understand why more women hadn’t been picked for the job. “Traditionally, it was the plum job for services rendered to the mayor, meaning it was a ‘gift’ going to whomever the current mayor owed a favor to—usually a crony’s son or brother or business partner. This practice

see City Representative on page 6A

was particularly egregious during Mayor “Spanky” Rabinowitz’s many years in office. It wasn’t until the city’s political system was reformed—with Statesman’s help—in the mid-1940s that Eleanor McKinney became the first female to occupy the position. Though the City Representative still retained most of its ceremonial duties, over the course of Mrs. McKinney’s thirty years of service it also became much more involved in city and hero affairs and much more efficient. She laid the foundation for today’s City Representative.”

That foundation was shaken to its core on May 23, 2002 when the Rikti began their massive invasion. As a result of the destruction inflicted by the alien attacks, the city’s entire civil and governmental structure was brought to the brink of annihilation. Reconstruction, which is ongoing, required a city government that was capable of proactive measures, ensuring that the city would never be caught unaware again. Out of this reorganization, the City Representative’s duties were totally overhauled—largely due to the efforts of Ms. Moreira herself.

“I was in Washington, D.C. when the attacks began,” Ms. Moreira said softly as she began to remember those terrible days and weeks. “Working for the FBI’s Counter-Terrorist Intelligence Section as a translator and analyst. While we were hit pretty hard In D.C., the reports out of Paragon City were simply overwhelming. I’m from Fall River, just down the road from Paragon City—and it was all too close to home. When I finally got through to my family, I learned that my father, a Fall River police officer, had gone to Paragon City. He was like that, always wanting to help people. Always fighting the good fight. As my Irish mom was fond of saying, ‘I fell in love with a hard-headed Portuguese cop whose heart was as big as all of Eire.’”

Ms. Moreira’s eyes drifted off and then held steady on a pre-invasion poster of Paragon City on her office wall. “We never found his body. He’s officially listed as MIA, but I, we, know… he’s a part of this city now.”

Ms. Moreira, taking an emergency leave, made her way up a devastated east coast to Paragon City, only to find mass confusion, panic, and death everywhere. Through her Justice Department connections, she found herself assisting in the coordination of the various agencies (FEMA, local and state police, the governor’s office, the Department of Defense) and Super Groups that were trying to organize the city’s defense and relief. “I’ve spent most of my adult life working as a coordinator, translator and liaison for the State Department’s Bureau of Intelligence and Research and the Justice Department’s U.S. National Central Bureau of INTERPOL, so I knew something

about the difficulties of inter-agency cooperation. Throw in a war and you had all the conditions for a complete meltdown.”

Her tireless dedication and amazing talent for getting the job done didn’t go unnoticed. Mayor Morales, the state government, and Super Groups throughout the city honored her with their thanks and appreciation. Statesman personally asked Ms. Moreira to remain in the city as an official representative.

“I brought up the concept of the City Representative being more than a figurehead,” Ms. Moreira said. “With my law-enforcement and intelligence experience, as the City Representative, I could function on multiple levels (visible and behind-the-scenes)—heading the communications and intelligence hub between the various FBSA (then newly chartered) branches and the civil and military authorities. The principle function would be to ensure the sharing and coordination of threat information between all agencies. On a more visible level, I would also be the liaison between the city government and the city’s heroes.”

Today, Brighid Moreira fulfills her duties as City Representative with as much enthusiasm and skill as she displayed during those dark months of 2002. Azuria, the FBSA’s MAGI liaison, tells the Times that Brighid “is simply amazing. She’s risen to the challenge and then some. The little girl from Fall River—a Harvard degree, speaks all those languages, and can kick your butt at Filipino Kali. Amazing. I’m proud to work with her.”

With the influx of heroes from all over the world, Ms. Moreira's job has grown considerably, and yet she remains dedicated to “The Cause” as she puts it. “Lawlessness, chaos, pain, injustice, evil… I’ve sworn to fight them the best way I can. We all lost so much here. Never again. That’s my personal oath.”

Despite the immensity of the job at hand and the classified nature of much of her duties, there’s one largely ceremonial aspect of being City Representative that Ms. Moreira cherishes.

“These heroes come to me, with fervor in their hearts—the fire for justice burning in their eyes—and I am honored to start those heroes who’ve been cleared for security levels 20 and 30 toward the right to wear a cape or to acquire greater control of their powers, respectively. It’s the most visible part of my work. And it’s perhaps the most honored part. These men and women who selflessly give of their hearts, minds and bodies to fight against injustice…I see my father in them. I see the same fierce love. We owe them for so much.”

The citizens of Paragon City are grateful to Ms. Moreira for her tireless efforts, her unwavering dedication to serving this great city, and her personal sacrifices. It is this city that owes her so much.