Sister Psyche and the Journey Home

INDEPENDENCE PORT, April 20 - She lies obscured by shadow, unmoving and silent, in a small secure room on an undisclosed floor of the Bell Medical Center in Independence Port. A Sleeping Beauty waiting for a psychic kiss to guide her out of a three-year dream. History knows her as the original Sister Psyche, who fought valiantly against the Rikti until her mind, overwhelmed and wounded, fled to a psychic sanctuary.

To those who gather around her in their daily watch—comrades, friends, and family—she’s simply Shalice.

Her CT, MRI and EEG scans show no signs of cerebral damage, and officially she’s been diagnosed as being in a Level 1 (Rancho Los Amigos Scale) coma—a scale of 3 on the Glasgow Coma Scale. Though her higher functions seem intact and unaffected, for all intents and purposes she’s been deeply asleep since 2002. Those are the clinical observations. Of course, Sister Psyche was never bound by mere physical limitations. While her body resides in Bell Medical Center, her soul, her consciousness, has managed a tenuous connection to the physical plane—in the form of a young woman named Aurora.

Aurora had called it a whisper. A psychic breath. A fine cool rain washing over her. She stood before the FBSA Council and surrendered to the connection. It was undeniable— 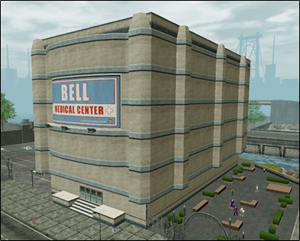 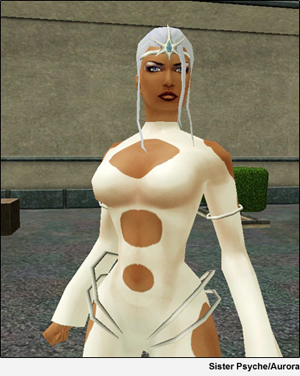 Sister Psyche was alive. With the official sanction of the FBSA and her peers, Aurora embraced this presence without hesitation. “I was the one she chose,” Aurora told the Council. “For whatever reason, she came to me and I will not let her down.” Since that moment, Aurora has manned her station outside the medical center, proudly bearing the name Sister Psyche. “I hold a sacred trust. As long as there is a connection, there is hope.”

To those who had known Sister Psyche the longest, it was a way to keep her spirit alive until she could return to her own body. That she would come back was a belief no one wanted to give up on, least of all Paragon City’s mightiest hero. It surprised no one that Statesman was often to be seen standing motionless besides her hospital bed, sometimes for hours.

From the Statesman Times interview, January 2003: “We lost so many against the Rikti. The magnitude of it all stuns the mind into a numbing resignation. Individually though, the dead and wounded, friends and loved ones…each of them are cold steel blades that pierce the heart. You always wonder, no matter how noble the effort, if it’s worth the ultimate sacrifice.”

In all, Aurora’s connection had been a miraculous happening, but not everyone saw it through such reverent eyes. Calvin Scott, Aurora’s husband, witnessed the miracle through eyes clouded by doubt and fear. He both supported and loved his wife deeply, but he wondered if this connection was putting her life and mental health in danger.

After learning of a new threat from within the Circle of Thorns, one that could destroy both the link and the hosts themselves, Scott knew he had to act. Was there a way to stop it? Could he free his wife and Sister Psyche without destroying them both?

And so he made plans. He set forces in motion—forces that threatened to unleash events and circumstances far beyond his control. He had to wonder if he had gone too far, if his fears had consequences that would forever change the course of history. But in the end, he had to push ahead with what he thought was right. With the help of Paragon City’s heroes, he recovered some secret tomes from the Circle of Thorns, and the ritual to separate the two heroic women was invoked.

Aurora could sense the change within her, and her first emotion was panic. The connection was being sheared away, layer by layer. She reached inward, struggling for that familiar presence. “Sister Psyche? Sister Psyche? Shalice?” A faint stirring of words touched her—as from a great distance. Aurora mouthed what she sensed from Sister Psyche’s mind: “I am coming home.” Her eyes flooded with tears as she contacted the FBSA.

The report from the medical center seemed to confirm the change. A change both disturbing and hopeful. Sister Psyche’s doctor, the eminent neurosurgeon Dr. Elliot Jaeger, had seen increased activity on both her neurological and EMG scans. He also reported brief REM activity as well. His prognosis was guarded: “She appears to be in the initial stages of Post Traumatic Amnesia—the process of regaining consciousness.”

They stood around her bed in silence, watching for signs, praying for another miracle. Heroes. Family. Friends. They were all bound by ties of shared struggle, of loyalty and honor. Even love. Sister Psyche was one of their own. And she was in desperate trouble. Somewhere deep within that motionless body, a terrible war was being fought, a psychic clash that had to be won. The alternative was just too harsh to contemplate.

Statesman turned to Calvin Scott. “I know you did this out of love for your wife,” he said. Scott looked away. “You should have come to us. You have set us on a course toward an unknown destination. The forces we are dealing with are….” Statesman reached down and touched Sister Psyche’s cool brow. “As soon as this is over, you’re out of the hero business, Mr. Scott. Do I make myself clear? As for Aurora, it’s up to her if she wants to continue serving this city.” Calvin Scott could only nod.

The monitors surrounding Sister Psyche’s bed began to record massive bursts of brain activity. Her body arched upwards. Dr. Jaeger ordered restraints. Statesman stood immobile, his face set in unreadable stone. Positron reached out to his friend. “Let them do their jobs.” Statesman continued to stand by the bed.

Statesman turned to Positron and the rest of the room. “She’s strong,” he said. “She’ll make it.” He looked at Calvin Scott. “One of the consequences of your actions needs to be monitored and, if necessary, dealt with. I want a full report on Malaise’s activities. I want him under constant surveillance. Now that Sister Psyche’s control over him has been interrupted, it’s only a matter of time before he turns—if he hasn’t already.”

Aurora let out a low groan and wavered on unsteady legs. “She’s almost completely gone… I can barely feel her.”

Note: "Due to the efforts of Paragon City's many brave heroes, Calvin Scott has accomplished his goal of severing his wife's mind from that of Sister Psyche. As of Update 4: Colosseum, Calvin Scott's Task Force will no longer be available. Until that time, players who wish to complete the Task Force can find Calvin Scott in Independence Port."