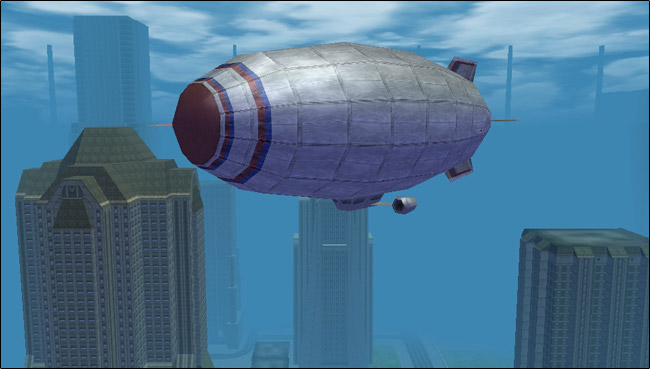 Flying high in the Spirit of Freedom

PARAGON CITY — On any given day or night in Paragon City, if you look skywards, you’ll see, as Statesman once remarked, “A graceful, soaring symbol of freedom and liberty, ever vigilant, ever ready.” And commanding this symbol is Captain James Finney. It would be no exaggeration to say that Captain Finney knows the city from 3,000 feet better than anyone—and he’s no super-powered hero with the gift of flight. “I do it the old fashioned way,” he says with a wry smile, “with a lot of gas.” 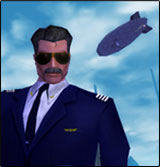 Since 1990, Captain Finney, 49, a former Air Force and commercial pilot, has been flying the skies over Paragon City aboard the airship Spirit of Freedom. “People call it a Zeppelin or dirigible. Technically, it’s a non-rigid, lighter-than-air (LTA) craft, or more commonly, a blimp.”

Captain Finney, who is the very image of a pilot—tall and commanding in his blue captain’s uniform, with a full head of salt and pepper hair, and steely blue

eyes—is Chief Pilot of the Narragansett Airship Company’s (NAC) newest Spirit of Freedom—the previous Spirit of Freedom having been destroyed during the Rikti Invasion of 2002. This new airship, built in 2003 by the famed American Blimp Corporation in Oregon, is a twin turbo-prop, modified A-60+ airship. 128 feet from nose to stern, she holds 69,000 cubic feet of helium. “It takes a crew of at least 14 to maintain and support a single blimp,” says Captain Finney. The Spirit of Freedom makes her home at the old Warwick naval air station, now called NAC Field, where she’s one of four blimps and the company’s flagship.

“The actual name, Spirit of Freedom, goes back to the first dirigible airship that NAC commissioned in 1935,” says Captain Finney. “The early 1930s were probably the apex of airship interest and usage around the world. Commercial passenger flights were the next big thing. That all came crashing to the ground on May 6, 1937 at Lakehurst, New Jersey.”

On that day, when Germany’s majestic dirigible Hindenburg erupted in flames while landing at Lakehurst, the dreams of giant airships ferrying passengers across the oceans burned with it. “Interest waned and turned towards fixed-wing aircraft,” says Captain Finney.

Airships didn’t completely disappear from aviation, however. With the advent of World War II, the U.S. Navy saw the benefits of using blimps for coastal reconnaissance, surveillance and escort duties. The post-war years saw great improvements in airship design

and safety. While blimps retained many of their wartime activities, they also began to be used as research vehicles and survey platforms. Stable and relatively inexpensive to build, maintain, and fly, blimps offered a cost-effective vehicle that could be adapted to perform a multitude of differing services. Add to that, the burgeoning interest of the advertising industry and television, and you had the makings of a small but welcomed renaissance in lighter-than-air transportation.

Today, NAC and its fleet perform a variety of duties in and around New England—everything from televising sporting events to supporting scientific research. Spirit of Freedom, though, has a special relationship (and license) with Paragon City. “We’ve been flying over Paragon City since 1935,” says Captain Finney. “During the war years, we patrolled the harbors as part of the Civil Coastal Watch and helped the navy with their anti-submarine patrols. With the rise of the super-powered hero and the passage of the Citizen Crime Fighting Act of 1937, we also added law enforcement support to our duties.”

One of the unique aspects of a city full of flying heroes is the complexity of air traffic control. “It wasn’t too bad in the early days,” says Captain Finney. “Commercial aviation was still in its infancy and flying heroes pretty much had the sky to themselves. With the Spirit of Freedom rarely cruising higher than 5,000 feet and faster than 30mph, accidents with flying heroes were pretty non-existent.”

In the 1950s and 1960s, with the rise of commercial and military aviation, the problem became acute. So much so that Paragon City began restricting its air space to military and emergency aircraft. If you wanted to fly to Paragon City, your plane had to land at neighboring airports—a policy that’s still in effect today. The one exception was Spirit of Freedom. By that time, NAC and Spirit of Freedom had established themselves as a valuable asset to the city’s planning and law enforcement efforts.

“The 2002 Rikti Invasion really put the lid on the city’s air space,” says Captain Finney. “Everything was grounded. It was total chaos. Death and destruction were everywhere. Heroes and civilians alike were being systematically wiped out.” It was during one of the last desperate battles of the invasion that Captain Finney and his crew decided that they had to help.

“It was a unanimous vote,” says Captain Finney. “We needed to get the wounded out of the area—Rikti warships or no Rikti warships.” Captain Finney and Spirit of Freedom headed towards the embattled city, flying at maximum speed and as close to the ground as possible. “Of course it wasn’t fast enough,” recalls Captain Finney, “but I pushed her with everything I had. A blimp’s one big bag of helium, which gives us lift. Inside that bag we have two smaller ones that we either fill with air to make us heavier, or empty to make us lighter. Flying that near the earth in a large blimp takes up a lot of your attention.”

By the time Spirit of Freedom arrived at the outskirts of the city, visibility was down to a few yards. “Smoke from burning and exploding buildings covered everything. And then there was the turbulence from explosions and weapons fire. Rikti ships loomed ahead blotting out the skyline. It was hellish.” Spirit of Freedom managed to locate pockets of wounded heroes and civilians among the ruins. “We just started to load them aboard as quickly as we could,” says Captain Finney. “All the while I was trying to calculate weight and lift and trying to avoid getting blasted. Heroes rallied to us and formed protective walls above and below as best they could. I remember Statesman, briefly, pointing at me to take off as he turned to meet a squad of Rikti head-on.”

Captain Finney made three trips that day before Spirit of Freedom had sustained too much damage to continue flying. “She just couldn’t maintain lift anymore. One engine was out and our control surfaces were shot to pieces. She was a great ship. She helped us save a lot of people.”

For their courageous and selfless work under conditions of extreme hazard, Captain Finney and his crew were awarded the Medal of Liberty by the mayor and Statesman himself.

The new Spirit of Freedom continues to patrol the skies above Paragon City. “Our mission has changed a bit,” says Captain Finney. “We have a lot of specialized and classified gear onboard—high tech stuff—that allows us to conduct surveillance on a level that’s quite astounding. We work closely with the Federal Bureau of Super-powered Affairs (FBSA) and the city government. Another service we’ve provided in the aftermath of the Rikti Invasion is detailed mapping to be used in the rebuilding of Paragon City. I’m proud to be part of this city’s revival.”

The next time you look up and see the graceful airship making its way above the city’s skyline, know that Captain Finney and Spirit of Freedom are on the job— in the words of Statesman, “ever vigilant, ever ready.”