TALOS ISLAND -- She’s not the fastest ship around. Nor the most beautiful. But to those who depend on getting around the islands (Talos and Peregrine), the 230 ft ferry Melody is the main means of transport. In service with Peregrine Ferries since the Talos real estate boom of the early 1980s, the Melody has ferried thousands of passengers and their vehicles without a single major mishap. “For a public transport that operates daily, year round, that’s a record we’re very proud of,” says Melody’s skipper, Captain Erika Janssen.

For many of those thousands, the trip between the islands is the perfect way to start or end the day. One frequent passenger, a high-tech worker on Peregrine Island, calls the commute her daily mini-vacation. “You can take your subways, your highways, and your buses—this is the only way to travel.” 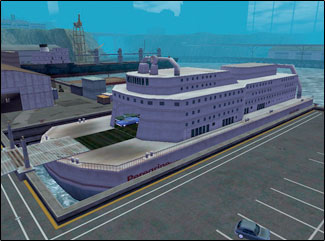 Captain Janssen, who has been in command of the Melody since 1988, couldn’t agree more. “I’ve always loved the sea. I started out as a regular deckhand and worked my way up to captain in seven years. I can’t think of any other job I’d rather have.”

Among the regulars who use the ferry are a great many super-powered heroes who protect and defend the city. “Taking the ferry may not be glamorous,” says one hero who goes by the name Alnilam. “But it does the job. Besides, it’s also a great place to meet up and talk with other heroes.” In fact, various teams and Super Groups have adopted the Melody as their unofficial gathering spot—much to the delight of tourists and residents alike. “It keeps crime away,” says Joseph Uribe, President and CEO of Peregrine Ferries. “And that makes for good business.” 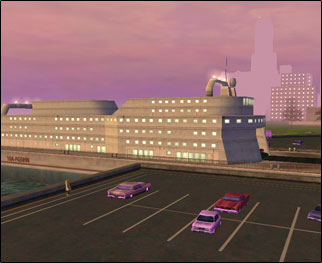 In the 24 years since the Melody began her service, there have been only a few incidents involving criminals—and none since 1995. Captain Janssen tells the story with a grin: “April 28, 1995. A beautiful spring day with calm seas and a boatload of passengers. A mob of about 10 Freakshow had muscled their way onboard with a plan to hijack the Melody. They managed to gain entrance to the bridge and were demanding rather loudly that we take them to Ithaca Island, of all places. Unfortunately for them, a group of about 30 heroes had just come aboard. The Freakshow never knew what hit them. I remember looking at the Freakshow, who stood frozen on the bridge as heroes appeared in the hatches, on the deck in front, and on the bridge itself. I thought, ‘This is going to hurt.’ Blasted, pushed, kicked, punched, thrown, heaved, and tossed—the Freaks were overboard and thrashing in the water before you could say ‘Have a nice day!’ Word then got around quickly; the Melody was not criminal friendly.”

Neither was the Melody alien friendly. During the Rikti Invasion of 2002, Talos Island remained largely unscathed for reasons that remain a mystery. The island became a major staging ground for amphibious combat operations and the Melody played an important part in the recovery of the city’s harbor islands.

“As a merchant vessel, we fell under the Navy’s jurisdiction during the war,” says Captain Janssen. “Caught unaware as we were, most of our naval resources were destroyed in the first hours of the invasion. The Melody became the main transport for the re-taking of Peregrine and Striga Isle. While heroes maintained combat air patrols above and in front of us, and armed civilian vessels sailed along with us as screens, we successfully landed thousands of regular Army, National Guard, police, and super-powered heroes on those islands. The fighting was fierce and our troops took a lot of casualties, which the Melody helped transport back to Talos. Though the Melody did suffer extensive damage to her superstructure, she came through the war with flying colors.”

In 2003, the Melody was completely repaired and refitted. She now boasts state of the art electronics and accommodations. “She’s not as sexy or as fast as one of those new Norwegian Speed Ferries,” says Captain Janssen, “but she has a ton of class. I’m proud to be her captain. She’s definitely the queen of these waters.”