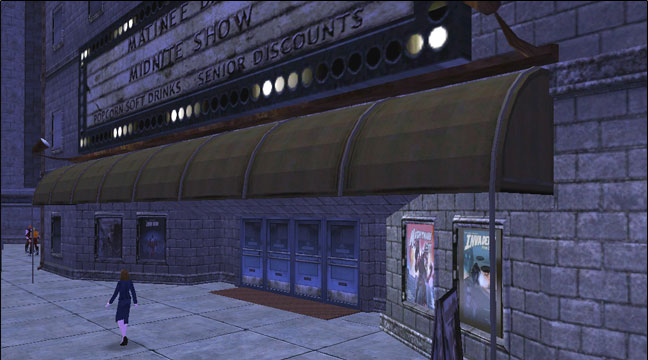 The Orion-Majestic Theatre Celebrates Its Once and Future Glory

GALAXY CITY, March 16, 2005 -- It's tucked back out of the way along the Orion Beltway in eastern Galaxy City--an aging theatre featuring third-run movies at discount prices. The faded and worn marquee above its awning-sheltered entrance no longer beckons with bright lights and the names of beloved movie stars. Once called the Orion-Majestic Theatre, over the years the name had faded (at least from public consciousness) and with it some 77 years of history. Some would say the theatre had simply become a victim of progress. Others more romantically inclined say that it's dying by inches of a broken heart. Perhaps if you placed your hand on those stained and cracked bricks you could almost feel the fading beat of a once glorious life.

Though the Orion-Majestic Theatre's history seems frozen within its walls, a little research can make even old bricks talk. And what a history emerges--a brilliant parade of cinema's greatest actors moving across its proscenium framed screen. Indeed, legends once appeared here, if not in person (though some did), then by wonderful black and white proxy. Fairbanks. Barrymore. Flynn. Gable. Chaplin. Garbo. In the flickering darkness, dreams and fantasies took wing and became almost tangible--there they were, all those images bigger than life, carrying you away to another place and time.

Old, young, rich, or poor, these dreamers in the dark became, if not equals, then at least fellow companions on a wondrous journey.

Hardly the epitome of architectural splendor then or now, the Orion-Majestic Theatre had once claimed the honor of being the most famous movie theatre in Paragon City. There would be others like it throughout the city--all designed by the same architect, Walter Palley (1885-1940), and commissioned by the notorious Gianci family in their bid to monopolize movie distribution in Rhode Island. The Orion-Majestic, built in 1928, was not only the first of these theatres to be built, it was the first to have the new Vitaphone system in place--a technology that ushered in what many at the time believed was a fad: sound.

The Orion-Majestic Theatre's new owner and film theatre historian, Nathan Thomas, tells the Times, "The Gianci family cared little about creating opulent movie palaces. They hired Palley to quickly design inexpensive theatres with the new Vitaphone sound system." The Vitaphone used disks (like vinyl records) that were played in synchronization with a movie.

The Jazz Singer (1927), the first major Vitaphone movie, made its Paragon City debut on May 10, 1928 at the newly opened Orion-Majestic Theatre. A year later, The Lights of New York (1928), the first "100 per cent talking picture" also made its debut at the Orion-Majestic. "The crowds loved it," says Mr. Thomas. "And the Gianci family really thought they had a gold mine. Unfortunately, their control over movie theatres in the state came to a crashing halt in 1933 after the arrival of Marcus Cole and the beginning of his anti-crime crusade as the Statesman. A year later, the former Gianci theatres were acquired by National Movie Theatres, Inc. Under the management of National Movie Theatres, the Orion-Majestic Theatre flourished throughout the 1930s and 1940s despite the Great Depression, featuring such legendary films as Modern Times (1936), Gone with the Wind (1939), The Wizard of Oz (1939), The Grapes of Wrath (1940), Citizen Kane (1941) and The Best Years of Our Lives (1946).

The early 1950s brought sudden calamity to the theatre. In the early morning hours of April 4, 1953, a fire swept through the Orion-Majestic, heavily damaging the interior. The cause was officially listed as an accident, electrical in nature, but unofficially it was caused by an overzealous hero (name withheld) with "super-electrical" powers attempting to arrest local gang members who were allegedly burglarizing the theatre. Extensive repairs were undertaken and a year later, the Orion-Majestic was re-opened to the public with a showing of On the Waterfront (1954). Despite its new look and lower ticket prices, the rest of the 1950s saw a steady decline in attendance--the emergence of TV as a popular and financially lucrative medium were generally cited as the cause.

The 1960s saw an even bigger drop in movie-goers, despite such excellent offerings as Lawrence of Arabia (1962), To Kill a Mockingbird (1962), Dr. Strangelove (1964), and Bonnie and Clyde (1967). Mr. Thomas notes, "The late 1960s and early 1970s were a time of transition for filmmaking and films in general. The French New Wave was beginning to make its mark on

American films. The whole 'Auteur' concept was taking hold with the rise of young talented directors like Scorsese, Coppola, Lucas and Spielberg."

Though bold new experiments were being attempted in filmmaking, audiences simply didn't go to the movies like they once did. The mid-1970s saw movie theatres closing throughout the country. Theatre chains were sold, bought out, or merged. It was during this period that the Orion-Majestic began its slow slide into obscurity. By the time the first true "blockbusters" arrived on the scene--Jaws (1975) and Star Wars (1977)--it was already too late. The inner city exodus was well underway. People and jobs were headed to the suburbs. Malls became the retail locations of choice. Multiplex theatres, featuring a dozen screens and the latest in comfort and technology, had become the grand opulent theatres of forty years ago.

National Movie Theatres, Inc. sold its interest in the former Gianci chain in 1981 to various private companies and individuals--some theatres were turned into parking lots, others refurbished into restaurants and office buildings. A few remained movie theatres. By the time of the Rikti Invasion of 2002, the Orion-Majestic had seen much better days. Owned by a partnership of local businesses that ran the theatre as a discount third-run film house, the building was in a deplorable state. Unwilling to risk an increase in property tax, the owners had no interest in restoring the historic theatre. By the time Nathan Thomas acquired the property in late 2004, the Orion-Majestic Theatre was on the verge of being condemned and demolished.

"I couldn't allow that to happen. Not to such an important part of Paragon City's cultural history," says Mr. Thomas. "The Committee for the Restoration of Paragon City (CRPC) has shown an interest in funding a restoration--especially since the theatre has officially been declared an historic site. For now, though, it's coming out of my own pocket. I'm already lining up new movies to be shown here again. I plan on showcasing independent and art films as well. Next week, we're having a special showing of a much anticipated new film. Stay tuned! Hopefully by next year, the Orion-Majestic Theatre will have recovered much of its former glory."

The Orion-Majestic Theatre remains an eloquent symbol of the enduring nature of movies and the wonderful capacity of an audience to live vicariously through its myriad images. The theatre has endured crime, world war, devastating fire, indifference, and neglect. And it still stands, offering within its darkened space a nexus where imagination, light, and shadow meet and flicker into magic.