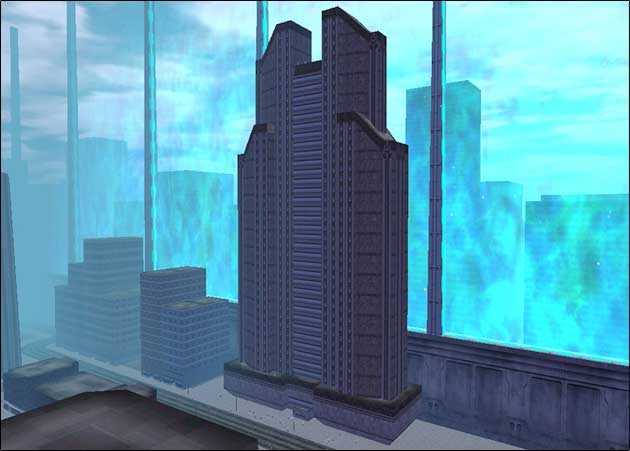 STEEL CANYON -- March 2, 2005 -- After the Rikti invasion of 2002, some of the overlooked casualties were the many historic buildings and monuments that were damaged or destroyed in the desperate fight. One such victim was the very building that housed this newspaper for nearly 60 years. Designed by Paragon City's renowned architect, Rudolph Augustus Seifert, and completed in 1935, the Paragon Times Building stood as a marvel of modern architecture and a symbol of journalistic excellence second to none.

That the building wasn't completely devastated by the Rikti is testament to the heroes who bravely defended this part of Steel Canyon. Statesman recalls the fierce combat that raged throughout the area and, in particular, around the Paragon Times Building. "It's a magnificent structure that has played a vital role in the recording and reporting of our history. The journalists of the Times were at the forefront in the fight against city corruption. They were also the first to champion the early super-powered heroes. Without their objective reporting and support, we could not have turned the tide against those who sought to keep the city chained to crime. The building is an icon. A symbol of light and justice in a world dimmed by evil. Many heroes fell defending it."

Former Times editor-in-chief (1940-1970) James Porter Kurst wrote in his 2003 best-selling book Blood and Ink: The Paragon Times and the Rise of Heroes, "The newspaper and the building became one and the same. Like Statesman, it became the embodiment of the eternal struggle against injustice. The Paragon Times became no less important than any super-powered hero in the war against crime--they used awesome powers, we used the written word. Together, we helped to make Paragon City what it is today. That deserted, wounded building in Steel Canyon deserves a better fate. It would be a great injustice to let the building remain a shell of its former glory."

Though the upper floors were greatly damaged by fire, the Paragon Times Building was never in danger of collapsing. After the invasion, it was a question of money, rather than safety, that stalled any efforts at repairing and renovating the historic building. The bill for restoring the city's most basic services and critical infrastructure was enough. There were simply no funds to restore many of the historical sites and buildings that were damaged. The Times staff had relocated to less auspicious offices across town and the building was left empty, its future uncertain.

Continued on page 7A 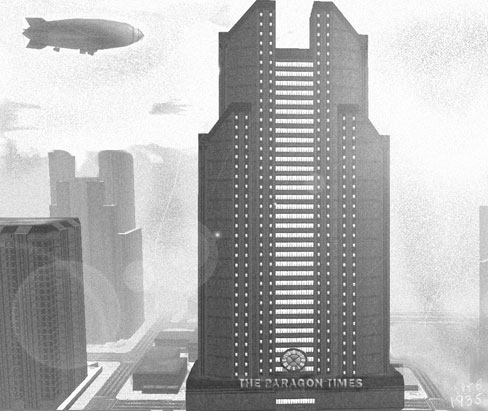 The Paragon Times Building circa 1935

In the wake of the Rikti Invasion and the influx of criminals who sought to exploit the city's woes, the Paragon Times Building was abandoned to various gangs, who used its darkened, vacant offices and crumbling hallways as hideouts and weapon caches. Where once was heard the irrepressible voice of freedom and justice, now only echoed cruel laughter and obscenities in the darkness.

By late 2002, the building's criminal population had exploded. "It just wasn't right," said one hero, named Pallida Mors. "That proud old building means something and to see it become a rat's nest, well, something had to be done." Soon heroes from all over the city were volunteering to go into the Paragon Times Building to do "a little house cleaning."

As the city began to pick itself up and welcome a new generation of heroes, a push was made to privately fund the restoration of the city's important historical buildings. The summer of 2003 saw the creation of an organization called The Committee for the Restoration of Paragon City (CRPC), that soon counted among its

supporters heroes, historians, politicians, journalists, corporations, and concerned citizens from all walks of life. Due in large part to James Porter Kurst's book, the CRPC decided to focus on the Paragon Times Building as its first major project.

"We're privately funded," says CRPC spokesperson Jane Halliday. "We receive donations from heroes and the public, and grants from corporations. We've even received funds from other countries. The support has been overwhelming."

Due to the tireless efforts of the CRPC and the generous support it has received from around the world, work on the Paragon Times Building has begun in earnest. Heroes and the Paragon City Police Department regularly patrol the site to keep criminals from returning. "We're finally beginning to heal," Mayor Morales told the Times when he visited the site. "We're coming together and rebuilding, not only our buildings and institutions, but also our sense of community. Our humanity."

With current funding levels, work on the Paragon Times Building is scheduled to be completed in early 2005. As one Times journalist commented, "It'll be like coming home."