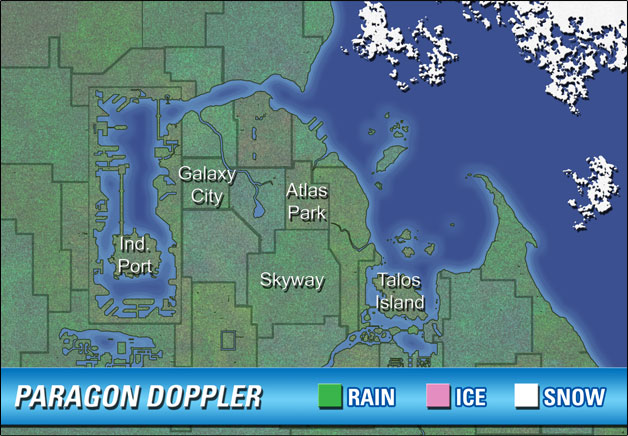 PARAGON CITY, RI, February 9 -- Through teamwork and selfless dedication, the stalwart heroes of Paragon City not only rose to meet the challenge of the Winter Lord's icy onslaught, but utterly destroyed his cold-hearted plans. The Winter Lord, in what can only be seen as a last desperate attempt to wreak havoc on the city, commanded his minions to unleash a final chilling blow. By giving up their spark of life and dissolving their solid forms, these mindless servants were able to freeze over the lakes and large bodies of water throughout the city. An anonymous spokesperson from MAGI has reported that through their mystical efforts, this freezing was brought under control and reversed without adverse impact on the city.

While the Winter Lord's origin and ultimate plans remain a mystery, Dr. Nathaniel Bierce, professor of Esoteric Anthropology at Winthrop University and MAGI consultant, had this to say: "It could very well be that this had some connection to last year's Halloween

incident. I daresay that anything involving the weakening of inter-dimensional portals or barriers can only lead to more incursions like this. It is a concern that the experts at MAGI are investigating quite seriously."

Statesman, in a statement received by the Times, offered his praise for the super-powered community. "Once again, Paragon City was threatened by a force bent on destruction. And once again you have met the danger head on. Through your steadfast vigilance and dedication to combating evil in all its many forms, you have saved our beloved city from disaster. Your deeds have not gone unnoticed or unappreciated. I am proud to be among you--as an equal--in the continued fight against injustice and lawlessness. Paragon City thanks you. And so do I."

With the Winter Lord and his henchmen thawed, seasonable weather is expected to make its return to Paragon City. According to the Paragon City Weather Center, the intense cold air that had stalled over the city for the past month has finally pushed off shore, with temperatures rising steadily over the next 24 hours.