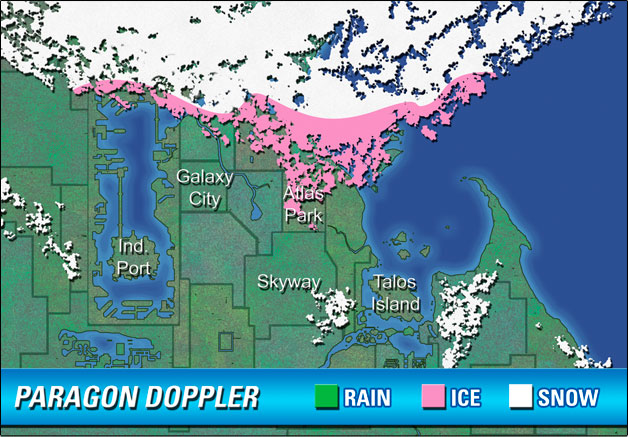 PARAGON CITY, RI, January 5 -- The National Weather Service (NWS), in conjunction with the Paragon City Weather Center (PCWC), has issued a severe cold weather outlook for the city and its environs.

"The jet stream has dipped sharply to the south and east, allowing bitter Arctic air to spill southward," said meteorologist Ellis Goodman of the PCWC. "I'd say we can expect a series of cold fronts to race through this part of New England, which will help reinforce this rather impressive cold snap. The air mass that's stalled over Paragon City has brought record lows to the area--but that's nothing compared to the air mass lurking in far northern Quebec. That one's colder than any I've seen in my 25 years on the job."

According to the NWS, temperatures in northeastern Canada have fallen drastically in the past 6 hours. Reporting stations from Quebec have already recorded

temperatures 30 to 40 degrees below normal for this time of year. Wind chill warnings have been issued throughout the region.

NWS meteorologist Dr. Sally Mansfield told the Times that all of New England should brace for an extended onslaught of extremely dangerous Arctic temperatures in the next few days. "Weather patterns are exhibiting some abnormal behavior," Dr. Mansfield admitted. "It's puzzling. Generally, these highs are known to bring cold air with them, but nothing on this scale. Although no precipitation is associated with the front, the coldness of its air mass is nearly unprecedented below the Arctic Circle. Hypothermia and frostbite will be of great concern."

The NWS and PCWC advise all area residents to prepare accordingly for record sub-zero temperatures. Stay indoors if possible. Report any heating problems you may have. Keep emergency food and water on hand. Stay tuned to your local news stations and the NOAA Weather Radio for severe weather watches and advisories as they develop.