KINGS ROW, December 8 -- Charlie McCracken has seen it all in his 15 years on the job with Paragon Power & Light's Kings Row district. Alien invasions. Monsters. The rise and fall of a multitude of villain groups. Not to mention a veritable host of colorful crime-fighting heroes sprinting, jumping and flying throughout the city. As a lineman, and later a line supervisor, he's become extremely familiar with one villain group in particular--the Clockwork. With their penchant for scavenging junk and scrap metal, fondness for electrical power sources, and highly aggressive nature, the Clockwork remain the greatest threat to McCracken and his crews. You have to become a Clockwork expert, McCracken says. Knowing how they behave and how to avoid them is crucial to survival.

Recently however, McCracken has noticed something odd about the Clockwork's behavior. Always the busy robotic worker ants, the Clockwork seem to have shifted into a whole new level of intensity. "They're almost frenetic in their collecting. That's worrisome in and of itself, but what's even more frightening is that these little demons are starting to collect at critical high tension towers. Used to be, we'd call in a hero or two to help us out. Nowadays we can't even get near the transformers and towers for regular maintenance without calling in a Super Group."

A highly placed source within the Federal Bureau of Super-powered Affairs (FBSA) has told the Times that this current increase in Clockwork activity has city officials seriously concerned. The Clockwork King remains among the most mysterious of villain leaders, and infiltration of his group has been all but impossible. Up to the minute intelligence is key to thwarting any group's plan. "In this case," our FBSA source told the Times, "we're working on a puzzle with most of the pieces missing." Visual evidence as collected by individual heroes and Super Groups indicates that the Clockwork are building a new kind of robot at these power sites. The FBSA's best guess is that the Clockwork King has initiated an escalation of scavenging and hoarding in order to complete one or more of these mechanical creatures.

The Paragon Times, in its own investigation, has uncovered references to a giant Clockwork called the Paladin. Our sources indicate that the Clockwork are using multiple power sources in Kings Row to help transform their scrap heaps into this new menace. It would seem that the Clockwork King's ultimate plan is to unleash these powerful Paladins in various locations throughout Kings Row in an attempt to bring the city to its knees. 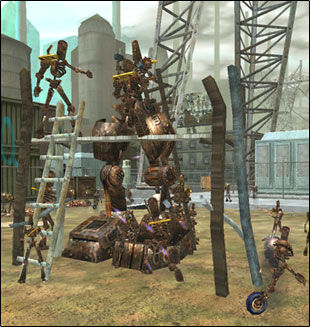 The FBSA has urged all heroes to remain on the alert in Kings Row--especially near high voltage towers in such areas as the western Aqueduct and southwestern Gish. It is recommended by the FBSA that these congregations of Clockwork should be approached carefully and in force.

The Paragon Times will continue to investigate this ongoing situation.