No rest for the "Moraine"

PARAGON CITY, Rhode Island, December 1 -- "It's the old Moraine. She's come back to take revenge." That's the opinion of one startled eyewitness who, on November 28, reported (and captured on film) the ghostly appearance of a large merchant tanker gliding down the streets of Independence Port. "They should have left her alone."

A charter boat skipper, this time off Talos Island, reported a similar ship heading out toward Striga Isle on November 30. "She came out of nowhere. A large, glowing apparition of a tanker. Then I saw the name across her stern. Moraine. She gave off this really sickening... I guess you'd call it an aura. Bad energy? I'd swear I saw people moving on her deck. Yeah, the Moraine... there isn't a sailor around these parts that doesn't know her story."

The Moraine's beginnings were ordinary enough. Constructed by the Striga Shipping Line in 1932, the 14,000 deadweight ton (dwt) tanker was meant to serve the ports and refineries along the eastern seaboard. But her very first voyage proved her downfall. On the night of December 17, as a nor'easter roared its way up the New England coast, the Moraine was seen sailing north from Striga Isle--destination unknown. One brief distress signal was reported and then she was never seen or heard from again.

Neither her captain, Renyard Kale, nor her first officer Conrad Dole, had filed a sailing plan. Her cargo manifest was never inspected. The shipping company reported her sailing as unauthorized. To use the words of a Coast Guardsman of the

period, "She went out into the storm and was swallowed up whole." An extensive sea and air search revealed no sign of the ship or those aboard her. Coast Guard and maritime safety investigators concluded that the Moraine had foundered in heavy seas and was lost with all hands. The official report listed 34 crewmembers as missing and presumed drowned. It would have been 35, but Ryan Mallory, a deck hand, had been too ill to ship out and stayed ashore. Unofficially, the total missing was closer to 65, as seaman Mallory reported to the Maritime Accident Board in 1933. "There had been rumors among the crew that Captain Kale was into the mob for a lot of money--gambling debts--and that he was taking on a cargo of about 30 'special' passengers and a large shipment of liquor. That's what I heard, anyway."

For 72 years, the Moraine's last voyage has been wrapped in speculation and mystery. Was she smuggling alcohol? Was it sabotage? An accident? Did she hit an old WWI mine? Was there a mutiny? Was she scuttled? Where was her final resting place?

For the past 10 years the mystery surrounding the Moraine's fate has been Professor Calvin Stewart's personal and professional focus. Heading the Seaview Oceanographic Research Institute's "Project Moraine Recovery" team, Prof. Stewart has searched literally thousands of square miles of open water. "I know she has to be out there," Prof. Stewart said in a Times interview early in 2003. "With better sonar and advancements in remotely operated vehicles (ROVs), it's a question of when--not if--we find her."

Continued on page 3A 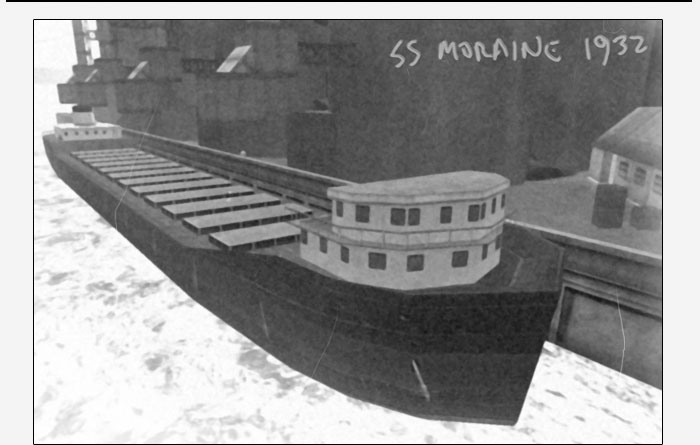 This question of "when" was answered on November 24, 2004. Prof. Stewart, aboard the advanced research vessel Paragon City Star, was making on one last sweep of an area some 12 miles NNW of Striga Isle. It was near this area that a fishing vessel had made the last reported sighting of the Moraine on that fateful December night.

"We were actually on our way back in and this was to be our last attempt for the year," Prof. Stewart said, "when the ship's sonar pinged something large and metallic on the seafloor 168 feet below." Soon the remote cameras began revealing the broad rise of a barnacle encrusted and rusting hull. "She was lying on her starboard side. Intact. I knew right away. It was the Moraine."

Preliminary ROV inspection confirmed the wreck's identity, but an initial dive revealed no further information as to the cause of her sinking. Before a full search could be made, an early winter storm forced Prof. Stewart and his team to withdraw from the area. "We have the exact GPS coordinates and the location is now marked," Prof. Stewart said. "We'll be back in the spring for a full examination of the wreckage and the surrounding area. She's been found, now maybe we can get to some answers."

Controversy erupted almost immediately, as local maritime preservation experts, historians, psychics, and relatives of the missing crew argued against desecrating what was now a gravesite. Skipper LeGrange, a noted historian and parapsychologist, told the Times: "The recent sightings of the Moraine

as a 'ghost ship' doesn't surprise me in the least. Such visitations of doomed sea vessels have a long and colorful history. The Flying Dutchman. The Mary Celeste. Rhode Island's own Palatine sightings off Block Island. There are fields of tremendous negative energy involved in the site of a tragedy--be it on land or on a ship. There are places on this planet that should not be disturbed."

"Nonsense," responded Prof. Stewart. "There are people who do not want me to find out the truth about the Moraine's sinking. This 'ghost ship' is a hoax--and a poor one to boot."

Skipper LeGrange told the Times that while he respected Prof. Stewart's 10-year effort, "The Moraine is now a tomb and even if Prof. Stewart's motivation is purely scientific, what's to prevent future unlawful salvage and tourist diving on the wreck? Something horrifying happened to the Moraine, her crew and passengers. Now she's been awakened after 72 years of deep, cold slumber. Who knows what terrible forces Prof. Stewart has inadvertently aroused."

Terrible forces indeed. As recent witnesses agree, the presence of the alleged "ghost ship"--even at a distance--seems to produce a highly unpleasant experience. Boaters are warned to stay clear of the phenomenon. Sightings of this "ghost ship" should be reported to the Coast Guard or to the Federal Bureau of Super-powered Affairs (FBSA). Super Groups are encouraged to be on the alert in the Independence Port and Talos Island areas. Despite Prof. Stewart's claim of a hoax aimed at thwarting his investigations, the FBSA urges extreme caution when confronting this alleged menace.

The Paragon Times will continue to investigate this phenomenon.