PARAGON CITY, Rhode Island, November 24 -- The International Longshoremen's Association (ILA) Local 1998-1 is threatening to pull all dockworkers from the piers and warehouses in Independence Port. According to ILA spokesperson, Cynthia Sones, "We have real concerns about the safety of our members. Until this matter is resolved by management, not one ILA member will report for work." 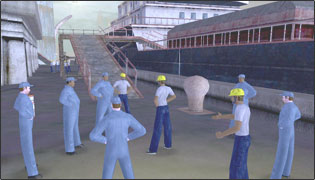 The management of Independence Port Shipping & Transport (IPST) issued a statement earlier today, stating, "This was an unfortunate accident involving the container ship Northern Light and a mechanical failure of one of its cranes. We are conducting a full investigation into the matter."

The "matter" in question, however, has an added twist as it also involves the alleged sighting of a "giant sea creature" in Independence Port on Monday, November 22, and the subsequent near fatal incident involving four dockworkers. According to one eyewitness, Captain Jack Brody, "I was heading out toward Wave Landing with a charter and I noticed some kind of disturbance about 150 yards off the port bow near Valor Bridge. Like something big was moving just under the surface, roiling the water. I thought it was a whale at first, but it never came up for air. The disturbance was moving fast toward the freight docks. Then I saw the arms come out of the water. Biggest damn octopus I've ever seen. If this city needs someone to go after it, I'm for hire."

Another eyewitness, Samuel Hall, had been fishing off a nearby pier. "Well, I noticed folks along the seawall yelling and pointing out into the harbor. Something was stirring up the water and moving along the shoreline toward the docks. I figured it was nothing but a pod of

Minke whales--you see them come in every once in a while--so I got out my camera to snap a few shots, but then something long and thick, looked like a giant tentacle to me, exploded out of the water and just slammed the dock. There must have been about five or six guys on the dock, and they just went flying."

The First District Coast Guard group out of Bristol is heading up an investigation into the incident and preliminary reports, despite alleged photographic evidence, indicate no presence of a large sea creature in the area. Commander Jeffery Simmons, Coast Guard spokesman, told the Times that they are coordinating with the city's Harbor Police. "With the added resources of the Harbor Police, we'll be better able to conduct a full investigation and get to the bottom of this incident." When asked about the reports of a giant multi-armed creature and the photographic evidence that seems to corroborate both the victims' and eyewitnesses' statements, the Coast Guard told the Times that the photograph has not been verified and that such speculation has no basis in fact.

The Times contacted the Seaview Oceanographic Research Institute for further information. Dr. Matthew Cooper, a noted authority on cephalopods, which include octopi and squids, was dismayed by the official statement. "his was no shipping accident. This photo...what you have here appears to be a member of the genus Enteroctopus--a giant octopus. They've been known to grow up to thirty or forty feet, but this one is...it's some kind of super anomaly and it's way off its usual south Atlantic feeding grounds." When asked why it was here in Independence Port, Dr. Cooper could only speculate, "Something drove it here. Competition. Disruption of its normal environment. If this is truly a massive Enteroctopus, then we have a problem. It's extremely intelligent and highly carnivorous. It has to eat at least 2 percent of its body weight every day."

In the meantime, with investigations and questions continuing and the FBSA asked to keep a watchful eye on the city's waterways, the ILA Local 1998-1's looming strike could put Paragon City's already shaky financial health into further jeopardy. Mayor Morales has asked heroes to increase patrols in Independence Port until the situation is resolved. "The safety of our dockworkers is paramount not only to Paragon City's economy," he said, "but to our community as well."

The Paragon Times will continue to investigate this situation.