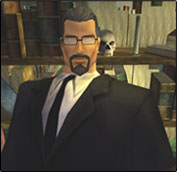 PARAGON CITY, Rhode Island, October 27 -- In his newest book, The Hammer of the World: Incantations from the Abyss (Winthrop University Press, 2004), Professor of Esoteric Anthropology Dr. Nathaniel A. Bierce writes, "The obsession with the fabled city of Oranbega (Norembega) notwithstanding, it was always Baron Zoria's secret and ruthless search for various tomes of occult power that drove his ambitions (and thus alienated him from his contemporaries--Crowley, Blavatsky, Westcott and Mathers). The prize he sought above all was the 10th century 'vulgate' translation of an Akkadian text, known as Malleus Mundi. Or The Hammer of the World."

According to Dr. Bierce, Baron Zoria obtained the "key" to this manuscript in the ruins of an obscure 13th century Templar castle in the south of France during the 1920's. However, he needed the complete text to unlock the powers that would "bring the worlds under my control." The tome was rumored to belong to various occult teachers and mystics throughout the 18th and 19th centuries, but the last owner of the Malleus Mundi was, to quote Dr. Bierce, "thought to have been none other than Zoria's one-time mentor, Grigori Yefimovich Rasputin. Though there is some doubt as to whether they had ever actually met."

M.A.G.I.'s own intelligence service and reports from heroes in the field indicate that the cult Zoria founded, known as the Circle of Thorns, seems to have managed a tenuous treaty with the Banished Pantheon and the Tsoo. In a recent phone interview with the Times, Dr. Bierce agreed with the

assessment and added, "Some resources indicate that Zoria's followers tracked down the text in early 2004 in the Lubyanka Museum's special archive in Moscow. It was the capture of this same archive that was said to have been one of the objectives of Germany's Operation Barbarossa during World War II. In fact, a secret unit of the German army, the Spezialwaffen Kommandotruppen, comprised of members of the occult-based Thule Society, was created specifically for this purpose. The archive, however, had been temporarily shipped to Siberia for safekeeping in the first weeks of the invasion."

In August 2004, according to Russian authorities, this entire archive was reported to be missing.

When asked if he thought that the Circle of Thorns had actually obtained the Malleus Mundi, Dr. Bierce said, "It's highly likely, though latest intelligence has reported turmoil within their axis of mystical groups. I wouldn't be surprised if the 5th Column were somehow involved as well--given this group's history with the search for the text." Indeed, as late as last week, a high-ranking Tsoo lieutenant, captured in a recent raid on Talos Island, confirmed a falling out amongst the groups and said that a "terrible, ancient weapon" was now in the hands of "those who do not understand the devastating nature of what they possess." The Tsoo lieutenant also told authorities that the recent Rularuu event had been "merely a small experiment." When asked what group he thought now possessed the text, Dr. Bierce said, "I can only hope that it's not the 5th Column, or worse--the Banished Pantheon."

With dire warnings steadily increasing, city authorities have called for vigilance. Mayor Morales, in his weekly radio broadcast, addressed the citizens of Paragon City. "Be alert, but remain calm and go about your daily business. We are doing everything we can to protect this great city from any threat--no matter where it comes from."