The Return of a Tradition

PARAGON CITY, Rhode Island, September 22, 2004 -- The Heroes of Paragon City have more than capes to show off these days. Heroes can now earn badges to mark their accomplishments. What exactly do these badges stand for, and how do heroes earn them?

Mr. J. Smith, Senior Clerk at City Hall's Information Desk, is an expert in all things pertaining to heroes. "The awarding of badges for special accomplishments has a long history," Mr. Smith said. "From the battle awards decorating Roman Legion standards down to the Heroic Citizen badge offered to courageous civilians here in Paragon City, they have been long-standing symbols of pride and excellence. For heroes, the first badges were awarded in Great Britain by the Dawn Patrol to bolster morale during those dark early years of the Second World War. Statesman and the Freedom Phalanx soon followed suit." According to Mr. Smith, the awarding and earning of badges waned in the post-war years, returning briefly during the Rikti War to honor the fallen. With the renewal of Paragon City and the influx of thousands of new heroes, Statesman decided that in addition to honoring Hero 1 with the wearing of capes, it was time to create a permanent system of awarding badges. "Badges are more than cosmetic ego gratification," Mr. Smith said. "On a surface level they may seem to be merely collectibles used for bragging rights--and heroes are perfectly in their rights to pursue them as such--but on a deeper level they represent noble and heroic accomplishments as recognized by other heroes." 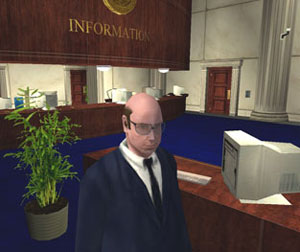 What do heroes think of badges? Nightbird, a relative newcomer to Paragon City, agreed with Mr. Smith's assessment. "Being a hero is hard work and many of us think that accomplishing this work--fighting crime--is reward enough. The citizens are always grateful. I love what I do. With badges, we know we have earned the recognition of our peers. That's very satisfying."

"Agreed," said NexusStar. "It's like when I was in the military and was awarded ribbons for this and that--I'm proud of what I've done and thrilled that my accomplishments have been recognized."

"It's another level of recognition," Nightbird said, "that gives us a little more bounce in our walk and straightens up our shoulders. Citizens may not know you've just achieved a milestone in your crime-battling career--but that badge you've earned is a permanent symbol of your success."

Mr. Smith pointed out another benefit that isn't readily apparent--that the earning of some badges links the hero to the historical heritage of Paragon City. "History Badges require the hero to gain a thorough understanding of the city's past and its bearing on the present and future. As the philosopher Santayana said: 'Those who do not remember the past are condemned to repeat it.'"

What kind of badges can be earned? Mr. Smith punched up a file on his computer. He scrolled down through images of badges. "There are four basic categories," he said. "With over 150 individual badges available. This one," he said, pointing to a badge resembling a compass, "is the Exploration Badge. You earn these by visiting interesting and important sites. The circular badge with a star is the History Badge, which requires you to visit the various historical plaques throughout the city."

If only for pride's sake or good-natured competition, badges would be a welcomed addition to the life of a hero--but there's another special perk that caps off the whole badge business. Though a bit hesitant to reveal all the details, Mr. Smith did offer this information, "Mind you, this is still in the developing stages, but according to Statesman and others in the know, the completion of a 'set' of badges will award the hero more than a nifty symbol to hang on their shingle. Think increased endurance, special equipment...that's all I can say."

In the constant battle to keep Paragon City safe from crime and destruction, our heroes boldly go into harm's way on a daily basis. There isn't a big enough badge in the world for this commitment. We, the citizens of Paragon City, can only offer our continued gratitude and support for their efforts.