Where Heroes come to rock!

PARAGON CITY, Rhode Island, September 15, 2004 -- It began as an underground rumor among a handful of Heroes in the Training Room. Whispered directions given to a lucky few. "You have to check it out." "It's in Steel Canyon." "No, it's over in Talos Island." "Independence Port."

Soon the buzz had emerged from the subterranean circuit and spread like an infectious backbeat. It's not easy to find. It's tucked away in obscure locations.

And, to quote one Hero, DevilMayCare, "It rocks!" 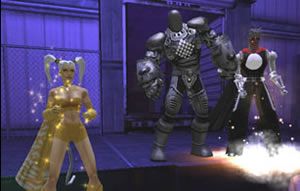 Though not officially endorsed by the powers that be, the city's newest and hottest social venue is already a big hit with our hard-working defenders of truth and justice. A place to unwind, to swap heroic tales, to see and be seen, but more importantly it's where to go if you want to "Shake it like a Polaroid Picture."

DJ Zero, the owner of Pocket D, remains pretty cryptic about the whole deal. "Currently, it's in a testing phase. No advertisement. No publicity. No set schedule. Word of mouth stuff. Pocket D will be a sort of movable feast, where the entrances could popup anywhere at anytime. I plan on going 'official' soon and maintain it year round. I hope the Heroes of Paragon City will make great use of it."

On any given night, the warehouse turned club is packed with Heroes sporting some serious dance moves. "I didn't think Tankers could do those kinds of moves," Stormwolf said in awe after witnessing a certain behemoth's routine. "He really benefited from the help of a Defender though..."

Another Hero, Elisa, on her first visit To Pocket D was obviously impressed: "So many separate areas!" she squealed. "You have the main dance floor, but also couches in the corners, niches under stairs, the mosh cage up top, pool hall area, a 'chill out' area above the ramp leading up there, the vending machine area with extra chairs, and so much more!" 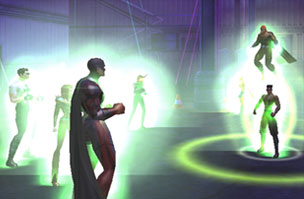 Nightbird, a frequent Clubber, found the place quite by accident. "I saw a bunch of folks go through this non-descript door in a building not too far from Steel Canyon's Yellow Line station. Normally I don't even bother following other Heroes, but I caught a few words about a club called 'Pocket D.' Curiosity got the better of me and, well, this bird became the cat that died and then got up and boogied..."

Pocket D features three discrete entrances and acts, through DJ Zero's own unique spatial warping powers, as a sort of inter-dimensional nexus. There's an entrance/exit in Talos Island, another in Steel Canyon, and yet another in Independence Port. According to DJ Zero, "I don't want to make it too hard to find but, then again, I like the idea that the entrances can be moved around."

By any indication, it seems that Pocket D, no matter how or where you find it, is on the verge of becoming THE place to hang out with the Hero crowd in Paragon City. "It may become too popular once the masses are hip to it," one Hero said. "I love the fact that it's still an underground thing, and that it's hard to find. Keep mixing it up. Becoming a chain or franchise would just kill it." 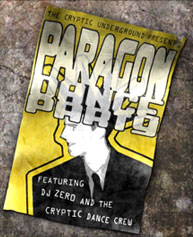 In the end, though, it's about community and the social building blocks that create a repository for shared experience. Heroes need each other, whether they are soloists or team members. It's a rough world out there. Parable, an insightful Hero and quite the dancer, put it this way: "I am all about the Club. If nothing else, it'll provide a place for everyone to better build as a community."