Paragon City, Rhode Island, July 19th -- Almost two years ago, Hero 1 bravely led a team of heroes through a Rikti portal and brought the first phase of our war with them to an explosive halt. On that day Paragon City's premiere hero, the Statesman, asked all heroes to remove their capes to honor his memory.

The recent increase in heroic activity has slowed the advance of villainy in Paragon City. Atlas Park and Galaxy City are safer than they have been in over a year, and dangerous areas such as Perez Park that were on the verge of being overrun have stabilized.

"When Paragon City is in her time of greatest need, heroes always answer. Hero 1 and the rest of Omega Team saved countless lives through their actions against the Rikti," Statesman said during a recent address to the Freedom Corps. "The heroes who are stemming the tide of chaos in Paragon City are carrying on this tradition in a way that Hero 1 would be proud of. I believe it's time to honor him in a new way."

An honor to be earned

Several representatives of the Freedom Phalanx were among those attending Statesman's speech. The overall tone was optimistic. Synapse, the Phalanx's speedster, had this to say.

"The heroes I have been working with recently are top notch; as usual, States' is right on the money. These new heroes deserve the opportunity to become living tributes to those who have gone before."

Numina responded to Synapse's comments with the following.

"It is fitting that the young defenders of our city be given the opportunity to earn this honor. We must all remember, however, that it is unlikely they would have this chance without the heroes of our past."

As always, luminaries from all over the city turned out to hear Statesman's speech. Several high ranking representatives of Paragon City were on hand, including Assistant District Attorney Coleen Nelson. 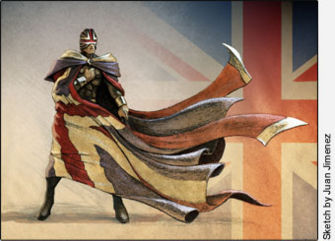 This artist's rendering displays the distinctive cape of the British champion, Hero 1

Weight of a Legacy

The onslaught of the Rikti was one of the darkest times that Paragon City, and the world, has ever faced. It appeared that humanity was on the brink of destruction. The turning point came when the brilliant Dr. Science realized that the Rikti had to be cut off from their reinforcements. His plan to send heroes through the portal beneath Paragon City to the Rikti home world needed a field leader. Hero 1 volunteered without a moment's hesitation. Even knowing that he would likely not return, the brave hero led Omega Team into legend.

Statesman concluded his speech with remarks that filled all in attendance with pride. It is clear from his final words that Paragon City is good hands.

"My comrades and I needed help, that much was clear. What was uncertain is where it would come from. Now we know. It came from among you. From the streets of our own city, from the other great states of America, from countries both large and small, even other worlds and dimensions. You came, and you have helped in ways no one dreamt of, ways that cannot be repaid with mere words. You, the heroes of Paragon City, have prompted me to offer this new opportunity. I congratulate you and tell you with the utmost conviction: I could not be more proud. I look forward to speaking of your deeds far into the future."

After the speech the members of Freedom Phalanx quickly dispersed to attend to their duties. Lively discussion among the attendees continued for several hours.