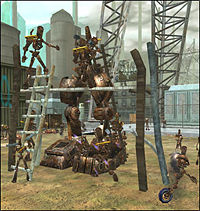 The Paladin Construction is a zone event that occurs in Kings Row.

The Clockwork are using multiple power sources in Kings Row to help transform their scrap heaps into this new menace. It would seem that the Clockwork King's ultimate plan is to unleash these powerful Paladins in various locations throughout Kings Row in an attempt to bring the city to its knees.

According to the City of Heroes Giant Monster Guide, this event has anywhere from one minute to 36 hours between occurrences. Multiple Paladins can be in construction and/or completed simultaneously. Up to 3 can be active at any given time.

Construction first starts when minor Clockwork minions begin appearing around Kings Row, carrying construction equipment. These minions, usually Cogs, gather the supplies on rooftops around the city where Knights build the larger Clockwork Princes. Once these are completed they move together to preset areas where the construction of the far larger Paladins begins.

Paladin is constructed in three spawn points in Kings Row. Once completely constructed, he will wander around the entire zone, followed by a parade of Clockwork.

There are 3 spawn points.

After a construction has spawned a Paladin, that construction site will be considered active until he has been defeated, which means that another construction cannot happen at the spot until he is defeated. All of the Paladins' paths through King's Row will end up in the same small park area in the northern part of the zone, a couple of hundred yards south of the Galaxy City gate. This park has become nicknamed "Paladin Park" because of the tendency for active Paladins to end up there. During construction the Paladin itself is inactive and does not have the ability to defend itself

Because of the park's proximity to the Galaxy City gate and its drone guards, it is fairly easy to pull the paladins out of their park and over to the drones, letting the drones remove the Paladins. This has the benefit of clearing the event from the spawn points so that another Construction has the potential of starting.

Preventing the Paladin's construction will award the Knight Errant Badge. This badge is NOT rewarded for defeating a constructed Paladin.