Mission:Max - The End of Vengeance

The End of Vengeance

Your transportation to the area will be arranged. All you need to worry about is ripping out whatever is in the heart of the Knives of Vengeance.

You'll want to bring everything you've got on this one, Character. If you win here, it's gonna be a huge blow against Mot.

All I can do at this point is wish you good luck, because I won't waste any more words on this situation.

No time to back down now, Character.

You arrive in the secret base of the Knives of Vengeance and see... a member of the Praetorian Olympian Guard!

You've destroyed the source of the Knives of Vengeance!

Character. I am Olympian 29, one of Emperor Cole's Olympian Guard.

I am here on the behalf of Praetor Duncan. We believe that a woman we are tracking, named Diabolique, is within this facility. However, I've determined this to be an extremely dangerous area.

I would suggest that you and I join together. I am here strictly to recover Diabolique and not to hamper your efforts.

Because we are both after the same thing, in a sense. Praetor Duncan believes Diabolique's presence here has something to do with the Talons of Vengeance appearing, which would tie in with these Knives of Vengeance.

Emperor Cole himself as ordered Praetor Duncan and myself to get to the bottom of this. The Emperor has no desire to see Primal Earth destroyed by a god of death, Character.

For the will of the Emperor, I will not allow Mot or anyone else to destroy Primal Earth.

Praetor Duncan is in a safe location within Primal Earth. Her safety is of the upmost concern of mine, as ordered by her.

She is currently monitoring all of my activities, including the conversation you and I are currently having.

I must warn you, Character. If you do not work together with me, then you are making yourself my enemy, and I will be forced to respond as such.

Do not force my hand when all I wish is to act as your ally in this task.

Director 11 here. I've got the place wired, just took out a number of the Knives who were waiting in ambush for you.
Slinger here, you're entering a maze that the Knives set up.


If you go the wrong way, they're gonna hit you hard, but there's an easy path to follow.


See that rug? If you just follow that, you'll get yourself straight out of there, no fuss.
Keres, Diabolique and Final Battle Dialogue 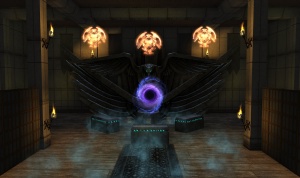 Source of the Knives of Vengeance

Diabolique: Now, I think you're being a little too hasty. I'm giving you a perfectly good offer.
Keres: I will not hand over the Knives to you, Diabolique! I will strike you down where you stand!
Diabolique: You can try. But I'm with Mot now, and we make such a lovely couple.
Keres: You? How did you gain favor with that monster?
Diabolique: I have my ways, why do you think I came to Primal Earth. Now, do we have a deal?

Olympian 29: For Emperor Cole!
Diabolique: Character! Well, looks like the Knives are at an end. Ta!
Keres: Diabolique! Character, you will not stop us from purifying this world!
The Orestes field is active, Character, it'll stop her from healing up. Finish her off!
Looks like another set of my mines just went off. Probably took care of reinforcements that the Keres was calling in.
Keres: What is this?! Who is dampening my powers?

You try to call up Max only to receive a message that the number has been disconnected. It seems that with the destruction of the Knives, Malta no longer requires communication with you.

You do, however, see a message on your communicator from Praetor Duncan, who expresses interest in working together with you in tracking down Diabolique.

You remember Olympian 29's comment, which was that the Talons of Vengeance seemed to be here because of Diabolique, and that she had some connection to Mot. You'll have to see what Praetor Duncan knows on the matter, as this can either bring you one step closer to defeating Mot, or into a trap set by the Praetorians.

Upon completing this mission, you are awarded the Knife Butcher Badge.