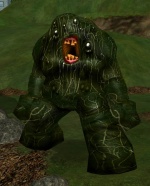 Kraken is a Giant Monster that is one of the Hydra.

According to the City of Heroes Giant Monster Guide, Kraken appears every 4 to 6 hours. This guide was written before Issue 8, which expressly increased the spawn rate. The current rate is unknown, but is definitely greater than the listed rate.

The Kraken appears to be a mutation of the strange Hydra Spawn that live in the sewers. For unknown reasons, it stalks the streets of Perez Park. The Kraken is quite powerful and can destroy full teams of heroes without effort.

Foot Stomp Point Blank Area Effect, Moderate Damage (Smash), Foe Knockback
Using your superior leg strength, you can Stomp your foot to the ground, quacking the earth itself. This is a localized attack against everything in melee range. Damage: Heavy. Recharge: Slow.

Spit (Ranged) Toxic, Damage over Time, Foe -Fly
This toxic spray continues to burn your flesh and prevents you from flying.