Sprites in the area around Kelly Nemmers are immune from attack.

I know of someone who could use your help.

Buck Salinger's an old Midnight Squad researcher, and he really knows his stuff. He can get you Magic and Natural Enhancements.

Buck's brusque, but he's committed. He will do everything in his power to help you.

Kelly Nemmers had all the makings of a magic origin hero. Talent, spirit, a willingness to learn, and an inherent ability to communicate with those in other planes of existence. Sadly, her training was just beginning when Salamanca became the physical nexus for all of Croatoa's mystical power. Kelly tried to fight the dark forces closing in around her town, but she was killed in the process. Her ability to communicate with those in other planes kept her in contact with the real world, preventing her from becoming a malevolent spirit like so many of her fellow villagers. Now, Kelly works to free herself and her fellow spirits from Croatoa's hold.

I don't remember you, though I have the feeling Active Contact is looking for you.

I've come to terms with my death, Character, so I'll ask you not to mourn for me. If you want to do something for me, you can help me unravel the many traps of this strange land.

You'll get hurt if you try to venture further into Croatoa before reaching Security Level 30.

You already have duties to attend to.

There's nothing more I can ask of you. Perhaps one of your other contacts could use your assistance.

I wish I had known you when I was alive, Character. I have the feeling we would have been friends. Perhaps these Enhancements can help you; I have little use for them now. You may call on me whenever you are in need.

I did not think I would become this close to you, Character. You have earned my trust, and all the Enhancements you wish.

You fiddle with a small stone fragment taken from one of the destroyed henges in Croatoa. It's still warm to the touch and it reminds you of...

Kelly Nemmers is a ghost in search of passage to the other realm. What you discover while working while working with her is that the spirits in Salamanca are being held there through pure rage and anger from the Red Caps. The Red Caps are evil little creatures full of hate and bile. You learned that their whole purpose for being here was to case conflict. They drink it up like nectar. Kelly and you devise a plan to at least try to put an end to this eternal conflict that rages on between the Tuatha and the Red Caps. By destroying the henges that bind the spirits here, it makes it that much harder for them to push through. But for Kelly Nemmers, it means a better chance of being able to pass on.

Save Waylon McCrane from the Tuatha

If we move quickly, you may be able to prevent another person from becoming a ghost! Mayor Bower hired an adventurer named Waylon McCrane, who claimed he could rid the area of the Tuatha de Dannan. The problem is, he got himself captured by them! Can you save Waylon McCrane from the Tuatha?

Waylon claims to be the fastest man on Earth with an arrow. I don't know if that's true or not, but he may be able to help you once you find him.

Waylon McCrane was trying to do something good for Salamanca. We should help him.

The Tuatha love these dank caverns.

Tuatha warrior: This one thinks he can stop the Tuatha.
Bres: The fool must die.

Bres: Exterminate all of them!

Once free: I have to admit, I may need some help getting out of here.

If refound: Thanks, friend

At the mission exit: Thanks, ol'buddy. Of course I would have gotten out on my own. Tough as nails, you know!

When you help Waylon McCrane escape, he will give you the Bow and Arrow temporary power.

Thanks. I know Waylon's very happy to be back among the free. I don't think he'll be back to Croatoa any time soon.

Waylon had to teleport to the hospital, but at least you got him out of there. If you hadn't the Red Caps might have killed him and kept his soul in Croatoa forever!

I'm sensing a lot of mystical energy from an area nearby. I think something terrible is happening in the spirit realm, and I need you to investigate! I'm not sure what's going on, but I think it's very important that you stop it!

Something terrible is still happening in the spirit world. I know it! 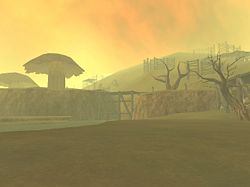 A howl of agony rises into the sky.

You freed the Tuatha from the Cabal's spells.

Cabal 1: We are close to an answer. I feel it!
Cabal 2: Yes. The spell will be complete soon.

Before combat: We must keep watch while the spell is completed!

Before combat: I cannot see how to proceed. The text is too obscure.

Combat start: Would you stop our work?

Hmmm. The Cabal seems to be working its spells on all manner of beasts. What are those sorceresses after? What could they want?

It sounds as though your intervention freed the Tuatha not just from their captors, but from their anger as well. Perhaps there's hope yet for Salamanca, if creatures like the Tuatha can be moved to make peace.

Repel the Fir Bolg from the Misty Wood

I'd like you to repel the Fir Bolg from the Misty Wood, Character. If we can decrease the violence in Croatoa, maybe we can give its denizens the chance to find peace.

The Fir Bolg and the Tuatha can't seem to resist battle whenever they lay eyes on each other. If we can keep them apart, it'll be better for everyone.

The wood is still full of Fir Bolg, Character. Can't you get rid of a few more?

You have decreased the number of Fir Bolg in the Misty Wood.

Thanks, Character. Now that you've created some breathing room between them, maybe the Fir Bolg and the Tuatha de Dannan can take some time to consider making peace. At a minimum, there'll be less violence around here for a while.

Find out what the Red Caps are up to

Have you seen those strange, small creatures roaming around the Misty Wood? The Red Caps? They're a terrible lot. Every time one of them gets near me, I find myself shaking in my protoplasm. I'd like you to find out what they're up to around here. We already know that they trapped the Fir Bolg in Croatoa, and snared the Tuatha as well when they began to fear the Fir Bolg would grow too strong to control. What other evil lurks in their hearts? I'd like you to tell me.

The blot those creatures leave on the spirit world is palpable, Character. They may look small and harmless. But they are evil, pure and simple.

We still don't know much about the Red Caps' plans.

One of the Red Caps you defeated grinned and said, 'Kelly be ours eventually!

So. It is hatred of these warring creatures that keeps me bound to Croatoa. Only by bringing peace to the Fir Bolg and the Tuatha can I, and my fellow ghosts, leave Croatoa and go at last to our resting places. I should have guessed. Croata is a world built on pain and enmity, nutured by the Red Caps' lust for misery. To break free of it, we must unravel the fabric of hate.

I've learned of a battle taking place in the spirit world. And it's not just any battle. Character, this fight has been going on for months! Ever since the Red Caps drew the Tuatha into Croatoa. The warriors are locked in combat, and they can't break free. Not until someone destroys the spells holding them in place. Can you stop this eternal battle? I think it may be the first step in freeing myself and the other ghosts from the bonds of Croatoa.

The spell can be broken if you destroy the three Red Cap henges that hold the Fir Bolg and Tuatha to that place. Be careful, Character. The creatures may hate one another most of all, but they won't exactly be thrilled to see you.

The battle and the hatred that pours from it is keeping me bound to Croatoa, along with my fellow ghosts. Please, set us free!

Howls of rage echo in the air.

You stopped the eternal battle!

Vile Tuatha! You will die!
Hah! You have fallen to the Fir Bolg
Destroy the work of the Red Caps!

Tuatha: By Dannan's name, I will make you suffer!

This war must go on!
We must not allow our land to be befouled.

Thank you, Character. Based on what the Red Caps told you, I believe that if heroes continue to stop the battles between the Tuatha and the Fir Bolg, we ghosts will eventually be freed. It makes sense, but it's more than that: I feel it in my heart. I feel freer, lighter, more at peace.

I don't know how to thank you, Character. You are the truest friend I ever had, in this life or my old one.

Don't be afraid, Character. I know most of the ghosts you've met aren't exactly great company. Well, I'm different. I've had magic powers since the day I was born. Those powers used to keep me in touch with the spirit world; now that I'm a spirit myself, they keep me in touch with reality. It's allowed me to retain my sanity and my personality, despite my violent death. But there are many others who haven't been so lucky. I'd like to help my fellow ghosts make peace with their deaths, and I suspect I'll find out how my studying the Tuatha. Could you go out into the wood and defeat a few of their number? I hope we can learn something of note.

Thank you for your kindness, Character.

We still don't know anything that might help lay the ghosts to rest.

One of the Tuatha you defeated gasped: 'Are you working for the Red Caps? They seem bent on making us miserable, ever since they brought us here to fight the Fir Bolg!'

I'm not sure if this gets us any closer to freeing the ghosts, but at least we are beginning to piece together the great puzzle that is Croatoa. I never realized that the Tuatha were recent additions to the spirit world. I do know that last Halloween, the Banished Pantheon performed a great ritual that allowed the Fir Bolg to walk the real world for a brief time. I suppose that's what made the Red Caps enlist the Tuatha. They wanted to make certain that the Fir Bolg they had imprisoned remained under their control, and so they resurrected a terrible war!