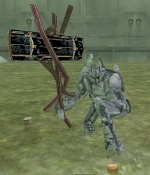 Jurassik is a Giant Monster of the Devouring Earth. It can be found in certain neighborhoods (Carnival Town, south of marker, and ??) of Crey's Folly.

According to the City of Heroes Giant Monster Guide, Jurassik appears in Crey's Folly every 4 to 6 hours. This guide was written before Issue 8, which expressly increased the spawn rate. The current rate is unknown, but is definitely greater than the listed rate.

A Monster/EB version of Jurassik is at the end of Numina's Task Force. Defeating it in this mission does not award a badge [1].

The giant monster was dubbed Jurassik by a hero some time ago, and the name has stuck (though the hero has regrettably disappeared). It appears that Jurassik has been mutated by the many pollutants and chemicals in Crey's Folly. Now, it is a creature of pure violence.

Hurl Boulder Ranged, Smash, Foe Knockback
The Rock can rip up a boulder out of the ground and Hurl it a short distance. The Hurled Boulder deals medium damage and can Knockback foes.