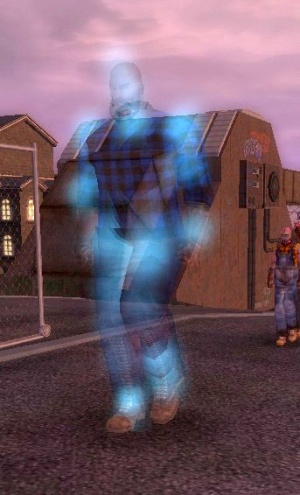 Ghost of Scrapyard is a Giant Monster that can be found in Sharkhead Isle.

Since Issue 12, whenever Ghost of Scrapyard spawns, the channel Villain Zone Event Messages will display the text Miner strike in progress in Sharkhead Isle.

Now this is disturbing. Captain Mako tore this guy to pieces years ago, yet here he stands, smashing everything in his way with his spectral hammer. You really hope every cape who has felt your wrath doesn't pull this poltergeist routine. It'll be a busy decade if they do.

Genuinely dedicated to freeing the scrapyard workers from oppressive conditions by the Cage Consortium, Scrapyard led a group of enraged miners across the island, rallying supporters to their cause. The pinnacle of this rebellion was the ill-fated protest march through the streets of Sharkhead. Unknown to Scrapyard and his followers, Cage had hired a local pirate and bounty hunter known as Captain Mako to stop the march. In order to halt the protest, Mako attacked Scrapyard with vicious precision. Although grievously injured, Scrapyard continued to lead the workers and so Mako tormented him, attacking again and again as he struggled through the streets. Bloodied and broken, Scrapyard led the horrified miners to the now infamous Pier 7 where Mako finally dismembered him. This act of brutal cruelty drew the attention of Lord Recluse who sought out Mako, seeking to harness this feral killer for himself.

Scrapyard's ghost can be found wandering the streets of Sharkhead Isle. Scrapyarders will rally behind him in their protest against the Cage Consortium and their working conditions.

Defeating the Ghost of Scrapyard awards the Hammer Down Badge.

Defeating 100 of the Ghost of Scrapyard's followers awards the Hammerhead Badge.