Lots of first person writing that needs to be formatted. 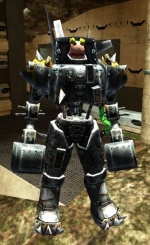 Eddie Crush is a NPC ally you can find during the mission Get Eddie Crush out from Council base from Captain Petrovich (CoV, levels 20 - 25). He's a Freak Tank who knows the possible identity of the leader of the Scrapyarders, and the Council wants that info too.
Once free, he will follow you and will attack any Council in his aggro range. He must survive the mission, so it is advisable to clear a path to the door before rescuing him.

During my mission, Eddie Crush spawned as a Pet of the level of the mission owner +1.

The mission will fail if he's defeated. Despite him being a Freak Tank, I don't think he had any special resistances. At least one wave of Council soldiers will attack you once Eddie is free.

During the mission he will be found fighting Council troops. Your help will be welcome:

Council soldier: Tell us who the Scrapyarder leader is!
Eddie Crush: Bite me, you Council wacks!
Council Archon: We will suffer your insolence no longer!

Eddie Crush: Who the heck are you?
Council Archon: Call for reinforcements!

Once free: Get me outta here and I'll tell ya what you need to know!

At the mission exit: Alright, here is the scoop.

The fully armored, incredibly tough Tank Freaks are a rare breed indeed. As their name suggests, they're almost unstoppable in combat. The one ray of hope when confronting a Tank Freak is that their electronics are not always top of the line, leaving them vulnerable to energy attacks.

During my mission, he used the Freakshow Tank typical attacks (Please note that Dull Pain and Revive are missing from the list; being a mission objective I refused to put him in any real danger):

Sawblade Ranged, Lethal, Moderate Damage, Foe Knockdown
Cybernetically enhanced Freakshow can throw Sawblades with deadly force. So much force that they can sometimes knock down foes.

Tank Grenade (Ranged) Targeted Area of Effect, Lethal/Smash, Foe Knockback
Launches an M30 grenade at long range from the Tank's backpack. The explosion of this grenade affects all within the blast and can knock them back.

Hammer Clap Area of Effect Foe Disorient, Knockback
Freakshow with two cybernetic hammers can clap their hammers together to send a shockwave that can Disorient most foes in a nearby area.