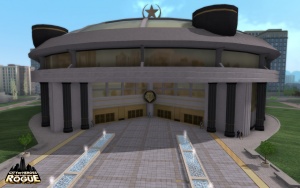 The Cole Transit Authority (CTA) is the official public transportation method of Praetoria, and as such is one of the most influential organisations in Praetorian government. The CTA controls the underground monorail system which ferries passengers between its three stations, one in the Magisterium district of Nova Praetoria, one in the People's Park district of Imperial City, and one in the Neuron's Reach district of Neutropolis, fulfilling the same function as the Paragon Transit Authority in Paragon City, or the ferries of the Rogue Isles. Like much of Praetoria's infrastructure, these trains make use of the Underground tunnel network, where they are also maintained and repaired by the Praetorian Clockwork. As a result, many of the older cars that have since gone out of service can be found here.

The CTA is also responsible for maintaining Praetoria's bus system, and its gold pentagon logo can be seen on every bus shelter in the city, but this fulfils no purpose in-game, and is purely for decoration.

The ruin of a fourth CTA train station can be found in the First Ward.