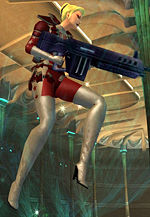 Captain Dietrich is a Longbow Hero with a rifle, jet pack, and cloaking device. She's the leader of Anti-Rikti operations in Longbow, and very critical towards the Vanguard.

When found in the Rescue captured Longbow soldiers mission, she will be fighting Rikti and will need to be assisted and freed from her alien captors. She will join you for the rest of the mission as an ally. Once you free her, a wave of Rikti will attack her. Being a mission objective, you need to free her, but not to escort her or even keep her alive during the whole mission. She may be easy to lose, since she can move fast with her jetpack and has the habit to spam her Cloaking Device power, making her hard to find in a hurry.

Note: When she appears as an ally, Dietrich is presented as a Hero; she is more like a Boss

When found in the Meet with Longbow mission, she will be fighting Nemesis and will need to be assisted and freed from her captors. She will join you for the rest of the mission as an ally. Being a mission objective, you need to free her, but not to escort her or even keep her alive during the whole mission.

Heroes and villains can find her:

Captain Wilhelmina Marlena Dietrich has proven herself as one of Longbow's top-notch field leaders in several major actions during her career. She has recently been placed in control of Longbow's Anti-Rikti Operations. She has long been a critic of the Vanguard and it's open-door policies.

During the mission Rescue captured Longbow soldiers she will be fighting the Rikti when you find her:

I did not need your assistance.
Come, let us find the others.

Your distraction was useful to my escape.
You're good for that, at least.

During the mission Stop the renegades, she will be hostile to you:

Before combat: Has there been any sign of Character?
Combat start: I was wondering when you'd show up!
At 100% Life: I always knew the Vanguard could not be trusted!
At 75% Life: What is your real agenda? You will answer me!
At 50% Life: Vanguard will be revealed for the traitors you all are!
At 25% Life: Even if you defeat me now, I'll still know the truth!
Defeated: Sefu was right, you are dangerous...

But how could he believe you could be trusted?

Defeats a player: And to think Sefu spoke so well of you. Hah!'

During the mission Meet with Longbow:

Once free: Let's find Sefu and clear out these intruders.

M30 Grenade (Ranged) Targeted Area of Effect, Lethal/Smashing, Foe Knockback
The explosion of this M30 Grenade affects all within the blast and can knock them back.

Web Grenade (Ranged) Foe Immobilize, -Fly, -Recharge
The Special Ops soldier has snared you in his web grenade. You are Immobilized, cannot fly and your attack speed is reduced.

EMP Grenade Hold, -Regen
You are held immobile by the EMP Pulse Grenade, and your regeneration rate has been reduced.

Rifle Butt Melee, Smash
A quick attack with the butt of a rifle.

Brawl Melee, Smash
When all else fails, use your own 2 fists.

Cloaking Device Self, Stealth, +Defense
The Cloaking Device allows you to use an LCD body coating become partially invisible. While Cloaked you can only be seen at very close range. If you attack while Cloaked, you will be discovered. Even if discovered, you are hard to see and have a bonus to Defense. Unlike some stealth powers, the Cloaking Device has no movement penalty. Recharge: Slow .