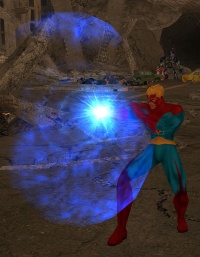 Blue Spectrum is a hero present in Galaxy City. Having been injured by the meteors, new players are given the choice to aid him, draining their powers, or kill him, boosting their own.

Blue Spectrum is able to absorb the power from others and use it to power his own energies.

Choosing to become a Hero and donating powers to Blue Spectrum bestows the following debuff: