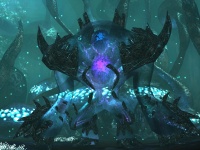 The Avatar of Hamidon is one of Hamidon's stronger soldiers, and has been in Praetoria for some time, waiting for... something.

Heroes, Villains, and Praetorians can find it in the Underground Trial and the Minds of Mayhem Trial as a level 54(+2) Archvillain.

The Avatar of Hamidon has lived in the depths of the Underground for years, though why no action has been taken against its presence or the clear infestation of the Devouring Earth is a mystery.

Cripple Cripple
The Avatar's ectoplasmic fluid has the ability to drain the energy out of an individual. The affected target is drained of all Endurance and receives a debuff to Recharge Rate and Recovery for 15s. Though this can be devastating, Cripple can be avoided, as it can only affect targets in a narrow cone in front of it.

Crush DMG (Smash/Toxic)
You have been crushed

Devour Foe DMG (Negative), Self +ToHit, +DMG
Using this power, you can drain the essence of all nearby foes, increasing your own strength. Each affected foe will lose some Hit Points and add to your Damage and chance to hit. Damage: Moderate, Recharge: Very Long

Grasp of Gaea Extreme DMG, Special(Divisible)
You are being consumed by the Will of the Earth. The Avatar of Hamidon will draw life essence from your location in six seconds. Stand apart from allies to help survive the blast!

Infection -Def, -Res (All)
Your Defense and Damage Resistance are reduced by 1/3 per stack of this power.

Resistance Resistance
This Archvillain is exceptionally powerful. It is resistant to all types of status effect to the point of immunity.

Defeating the Avatar of Hamidon at the same time as an IDF bomb in The Underground Trial awards the Avatar Assassin Badge.