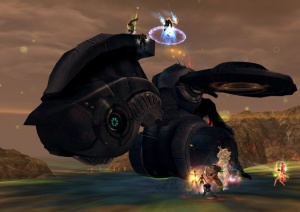 The Arachnos Flier, being attacked by a team of villains.

The Arachnos Flier is a Giant Monster as part of the Zone Event in Grandville. It also appears in the final mission of the Statesman Task Force. One appears in Mercy Island as a Transport but it cannot be destroyed in that zone.

Since Issue 12, whenever the Arachnos Flier spawns in Grandville, the channel Villain Zone Event Messages will display the text Arachnos Flyer patrol beginning in Grandville. 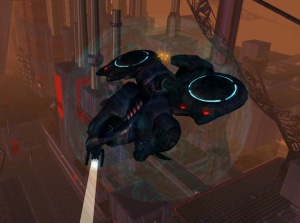 The Arachnos Fliers are used primarily for troop deployment. If you see one, run.

Arachnos frequently sends aerial patrols down into the Gutter to curb any hostile activities and to provide valuable combat experience for its troops. Every 2-8 hours (real time) and during dusk (game time), a large transport emerges from the hangar atop the Watchtower and slowly descends to the lowest levels of Grandville. During transit to its drop zones, the transport will have an incredibly powerful shield active, protecting it from all attacks. When it reaches its drop zones, the transport will lower its shields to engage its attacks. Also, 7-12 Bane Spiders will teleport from the ship down to the ground. These troops attack any unallied targets in the area, which typically end up being Arachnoids or player villains. If there is nothing about, the Bane Spiders stand guard for a short while. Pay very special attention to both the squads and the flier; troops occasionally radio for backup.

Arachnos Flier Gamma at a waypoint