A Eulogy for Statesman

A Eulogy for Statesman 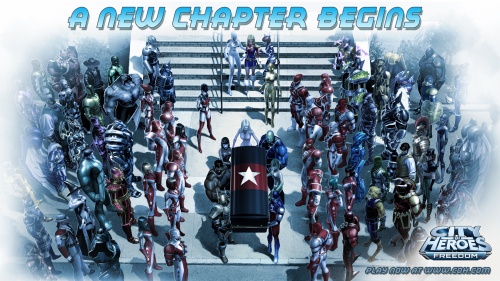 It falls to me to speak a few paltry words about my fallen friend and comrade, Marcus Cole, the man known as Statesman. He was a beacon of strength, moral fiber, and inner will, a bastion of strength that protected Paragon City. This larger than life man, whose years have spanned further than many realize, was a hero, a paragon. He was also a steadfast family man, a tenderhearted and protective husband, father, and grandfather.

Husband. Father. Grandfather. Hero. Paragon. The man who championed Paragon City as Statesman has been all those things and more. As Marcus Cole, Statesman loved and married Monica Richter, sister of his best friend, Stefan. Monica and Marcus reconnected shortly after he returned to Paragon City in the 1930s. At that time, Marcus revealed to the world that he had unlocked his inner will, and he took on the persona of Statesman. He protected Paragon City alongside with the original members of the Freedom Phalanx from Nemesis's failed invasion on Brass Monday, cementing his place in history.

In the 1940s, Statesman led the US war effort in Europe, fighting for the Allies in World War II alongside Maiden Justice and the rest of the Freedom Phalanx. Allied with the British super group, Dawn Patrol, Freedom Phalanx pushed back the Axis powers on the western front. But Statesman's efforts didn't stop there. He was also seen operating in the Pacific theater on occasion. Whether those sightings were simply tall tales told by GIs to boost morale is unknown, but Statesman certainly did use his power to help no matter where on the globe he was needed.

As he continued to champion and safeguard Paragon City, Monica and Marcus welcomed a daughter into the world. This girl, Alexis, went on to become Miss Liberty in the 1960s. Alexis Cole-Duncan was killed in the disputed territories of Warburg after a peace conference came to blows. Marcus Cole, saver of countless lives, grieved immensely for not being able to save his own daughter, and conflicting reports link Alexis's death to the events surrounding the Statesman's death.

In the late 1980s, I [Positron] recruited Statesman to rebuild the Freedom Phalanx. Together, we fought off Arachnos. Statesman went on to lead the Freedom Phalanx throughout the '90s, and we were instrumental in fighting back the Rikti during the first Rikti War. He led the Alpha Team of heroes, fighting off the Rikti from our side of the Rikti dimensional portals while Hero 1 led the Omega Team and sealed off the portals from the Rikti side. Thousands of heroes died in that battle, but Statesman's team, due to his bravery and unfailing mental and physical strength, came through relatively unscathed.

Statesman only reluctantly let new heroes risk their necks in the perilous streets of Paragon. After the rebuilding of Paragon City, the influx of heroes moved to live in and protect Paragon City swelled, inspired by Statesman deeds and his principles. Paragon City earned the nickname "City of Heroes" primarily due to the influence Statesman held over new heroes. They flocked to fight by his side.

A few years back, Statesman went missing. It wasn't the first time he dropped off the radar, but his close friend and confidante, Maria Jenkins, had a suspicion that he wasn't simply on vacation (as some suggested). Maria enlisted a young, trustworthy, but experienced hero who looked up to Statesman. That hero uncovered a plot by Tyrant, a Statesman from an alternate Earth, to kidnap and steal our Statesman's power to augment his. It was only due to the valiant efforts of the hero Maria recruited that was Statesman was able to be with us in the years that followed to once again mentor his close family to see one of them become a hero of Paragon City. Statesman's granddaughter, the Vindicator known as Ms. Liberty, started off her career as Statesman's sidekick, but she quickly blossomed into a strong leader. Ms. Liberty vowed to continue her grandfather's tradition of mentoring and training new heroes, and her dedication to that continues to this day. Statesman spoke to me several times about how proud he was of his granddaughter, who has grown up to become a role model that is looked to up herself.

Statesman also made a positive impact on many villains, prompting them to shed their former lives and rededicate themselves as heroes in Paragon City. Statesman operated without a sidekick for quite some time until the demon summoner Desdemona crossed his path. This misguided villain believed that Statesman was responsible for the death of her mother. She confronted Statesman only to learn the truth behind her mother's death and that Desdemona had been living on a foundation of lies all her life. Statesman took the distraught young girl under his wing as his new sidekick, and she has quickly followed in his footsteps to prove herself as a full-fledged hero.

We may never know exactly how Statesman died. He was a great man, a great hero, and he doubtlessly died true to himself. Statesman's hand was a hand that lifted us up with inspiration. His back was the strong back of a sheltering protector. His wisdom, that of an insightful teacher and leader. His confidence, driven by a profound optimism about the human spirit.

Paragon City will never see the bright flash as he swoops by against a blue sky once more, never hear him rally us in the face of an uncertain future again, never fight side by side with him to stand for what we believe in our hearts. Yet in reality, we will see him, hear him, experience him in the faces of his family and friends, and in our hearts and minds forever.

Statesman is now one with the spirit of Paragon City. Godspeed, my friend.