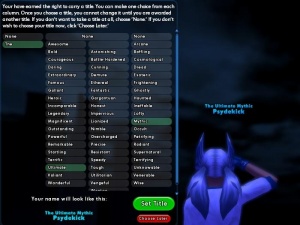 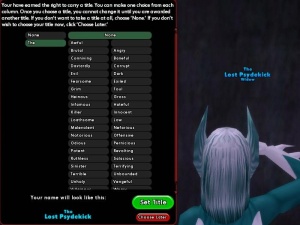 There are different set of titles available to your character depending on their alignment: Hero; Villain; Loyalist; Resistance.

Once your character is level 15, the title can be changed at any time with the command, /title_change. Trainers give the character a chance to chose or change their title at levels 15, 25, 35, 45, and 50.

The title selection window allows you to select the title or combination of titles you wish to use. The leftmost column will give you the choice of adding the word The to the front of your title. The second column will either contain the generic titles and will either contain 1 column of level 15 titles or split between generic and 24 month vet reward titles. The final column will contain the level 25 origin titles. At the top of each column is the word None which will allow you to clear a title or not select one for that column. At the bottom of the window is an example of what your title will look like. If the title is satisfactory to you, you can then press the green Set Title button. If you change your mind, you can choose the red Choose Later button to cancel the procedure.

"Yellow Titles" are not selectable titles at all. They appear in yellow text (hence 'yellow title') above the character's selected title, or above the character's name if no title is selected. These are rewards from GMs, developers, and OCR for special events, actions in or out of game, and sometimes randomly.

There are two kinds of yellow titles, temporary and permanent.