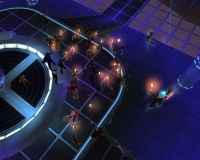 During the Paragon Studios live UStream broadcast on May 10th, 2011, Beastyle hinted at Null's possible return. Whether it will happen or not remains to be known.