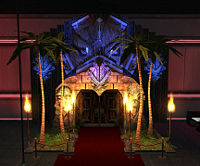 Mac and the Zombies

The Tiki Room is a special area in Pocket D that is only accessible to players who have the Pocket D VIP Gold Club Member Badge, which is only attainable by through a Good Versus Evil Edition retail or goodie pack code, or purchasing the VIP Pass from the Paragon Market.

The entrance to the Tiki Room can be found in the downstairs area of the villain side of Pocket D. It can be easily identified by the palm trees and tiki torches surrounding the ornate entrance.

Gold Club Members can enter the lounge through the door, and can also teleport directly into the Tiki Room using the accolade power, Pocket D VIP Pass, from nearly any location in the game.

The Tiki Room features a Banished Pantheon Spirit Mask bartender and a human bartender, both of whom sell inspirations.

As of Issue 13, Trina the Body Sculptress is available in the upper deck of the Tiki Room, altering costumes and, as of Issue 15, body types as well, for both heroes and villains.

A Banished Pantheon band/dance group, unofficially referred to as "Mac and the Zombies" or "The Zombies", can also be occasionally found on stage. The group members are made up of two Dry Husks named Mikey and Franky, two Dry Chambers named Johnny and Joey, and a Totem named Mac. The group only appears rarely, and disappears as soon as a player enters the room by teleport.

When their act ends, Mac and the Zombies wave and exit through the door at the back of the stage (where players teleport in from). Occasionally their exit becomes bugged, and they stand in place either until the next server maintenance or until a significant amount of time passes between player access of the lounge.

The Tiki Room was added to Pocket D in August 2006. The room was not initially accessible and players speculated wildly as to its purpose, as no official announcement was made regarding it. Some players were able to gain access to the room using Teleport, and screenshots of the room were posted on various messages boards. In response, Dampening Fields were introduced in Pocket D to prevent teleportation.

In October 2006, the Tiki Room was made available to players who had purchased either the Good Versus Evil Edition Retail Box Set in stores or the goodie pack from the NCsoft Store. Both of these purchases granted registered players access to the Pocket D VIP Pass.

The Tiki Room's Banished Pantheon "dance" act appears to be influenced by punk band the Ramones, with two members having directly identical names (Johnny and Joey: they were the only two original members who stayed with the band until their retirement in 1996). A popular comic reference to Joey Ramone's visage was that he looked like a zombie, and it is probable that the Banished Pantheon are used to reiterate this joke.