From Paragon Wiki Archive
(Redirected from The Protest)
Jump to: navigation, search

The Angry Citizens of Nova Praetoria are forming a very public protest in the south-west quarter of the Magisterium. Will you help their cause or prevent them from protesting further? 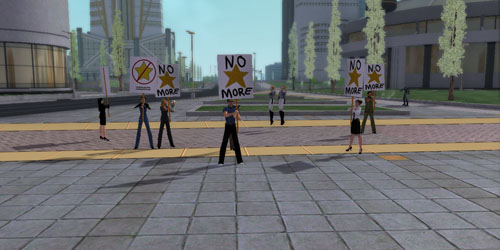 The event takes place a few yards north-west of the CTA station in Nova Praetoria, at approximate coordinates of (-4033, 33, -256). Once the protest is up, it will remain there until participation. Each segment has a ten minute timer and once the event is completed there is a one hour cooldown timer.

The Seers will now become allies and you simply have to defeat the yellow-con Protesters. They have little in the way of attacks so it's simply a fight against the clock. The Seers will maintain a 3 man presence while the protesters will show up in five to seven members, replacing defeated members as the event progresses.

This phase sees a 3-strong mob of Destroyers show up and try to destroy the scenery surrounding the area. You will still have the support of the 3 Seers who will refresh every minute, teleporting out any surviving members and replacing them with 3 more. Thankfully the Destroyers are more interested in destroying you so simply beat them down before the 15 objects are destroyed. The only problem is the yellow-con protesters will be showing up a 7-strong presence, often blocking your targeting. The Seers will continue to attack them while you go after the Destroyers.

The last part of the this path involves taking out red-con Protest Leaders but you efforts will be hampered by the continued presence of those yellow-con protesters who don't count. The leaders will be more aggressive and hit slightly harder. Much like the Destroyers they will go for you and you allies as they get near to you. Once the last leader is defeated, all NPCs will retreat and you can claim your reward.

The Protesters will now turn into allies and the original Seers will escape only to be replaced by a constant presence of 3 Seers. As each one is defeated it will be replaced immediately by another. Since the Protesters are now allies they will also fight the Seers with their limited weaponry.

Once the last Seer is defeated, any remaining Seers will port away and the nearby objects such as cars, parking meters, bus stops and fire hydrants will be targetable. This is very similar to a Mayhem Mission in that you simply have to destroy the objects within the time allowed.

After the last object is destroyed, T.E.S.T. Officers will start teleporting in, also in groups of three, and begin attacking. They will focus on using their blasts and attack your protester allies who will fight back with what little help they can. Once the last officer is defeated, all NPCs will retreat and you can claim your reward.

The availability of the rewards is proportional to your level of participation. There are no side-specific rewards to this event.

Choosing this reward you will receive the Protester Badge for your fine example of civic duty...

Choosing this reward you will receive a random Dual Origin Enhancement usable by your origin.

Choosing this reward you will receive one Reward Merit.

Choosing this reward you will receive a small number of fire bombs used by the protesters as a temporary power you can use.

Choosing this reward you will receive a single random piece of Invention salvage.

Choosing this reward you will receive a single random (common) Invention enhancement recipe.

Choosing this reward you will receive an additional amount of bonus Information.

Choosing this reward you will receive a single random Medium or Large Inspiration.