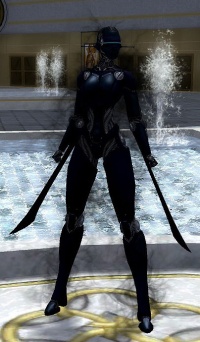 Nightstar is a Praetorian Earth Archvillain, the Praetorian counterpart to Primal Earth's Luminary.

Defeating Nightstar is required for the Dimensional Warder Badge.

Nightstar is the trainer in the Imperial City.

This android was created by Anti-Matter as a testament for his love of Praetor Duncan. The original shell has since been destroyed, and uses a new Clockwork model. Nightstar draws her near-infinite power from another dimension known as the Black Shroud.

Prior to Issue 18, the following was the description for Nightstar: