Difference between revisions of "Jim Temblor"

Jim Temblor also appears much later in the game as Faultline in the Rikti War Zone as a member of Vanguard Shield.

Jim Temblor is open to all heroes at level 15 without direct introduction. If not spoken to directly, one or more of the other level 15-20 contact will give the player a mission to go talk to him or give a direct introduction to him.

There's this kid I know, named Penelope. Her dad used to run Yin's Market, back before, and she'd always latch onto Annette and me. She was a little brat, but she was really nice. Well, when her Dad found out the city was rebuilding, he came back to reopen his store, but I hear that he's gone missing. Penelope's all by herself, well, aside from those weird Clockwork. You helped me out, so I was wondering if maybe you could help her out?

Thanks, Character! Penelope's a sweet kid, and her dad was always cool. Oh, and just don't be surprised if she knows that I sent you. She's like that. It's like she's psychic or something.

I suggest you go speak to Sgt. Suzanne Bernhard in the street crimes division. She's a good person to know, especially when you're dealing with the Tsoo or the Council. Sgt. Bernhard works the desk in Skyway City.

Suzanne always has her eyes on the streets.

There's a great young historian you should talk to named Wyatt Anderson. He's an expert on the history of all things super-powered, and he can be a big help to new heroes like you. He's especially interested in taking down the Clockwork and the Trolls. Wyatt's research has him in Steel Canyon these days.

Wyatt has a wealth of information.

Jim Temblor lost his father when the villain Faultline destroyed the neighborhood of Overbrook, turning it into the ruin that still bears his name. Now that the City is trying to rebuild Faultline, Jim has returned to his old neighborhood, looking for some closure, and maybe something else.

Who are you supposed to be? Some kind of hero? Did one of those do-gooders send you? Well, I don't need your help! I got it all covered! Me and...

Look, I had a friend of mine who was trying to help me, but I think she's in trouble. Real trouble...

Wait, you're not even Security Level 15? Fusionette's a 15, and she couldn't handle it! Look, I appreciate the help, but I can't send you to your death!

You see, this friend of mine, she's got powers, kinda like you. She calls herself 'Fusionette' now, went and became a hero. But we've been friends since we were kids living here before...

Well, I came back to Overbrook to find something, a memento of my Dad. He died when it all happened. I didn't find it, but I did found out that the Lost probably took the thing I was looking fore when they were scavenging for valuable stuff. Annette, sorry, 'Fusionette' said she'd check it out for me, but she hasn't been back yet, and I'm starting to get worried. I know you hero types stick together, so I was hoping you could help her?

The group of Lost she was investigating was using this one warehouse as a meeting place. I tried to check it out myself, but they roughed me up pretty bad. I'll give you the location. And, uh, thanks. For helping her, I mean.

This place looks mostly normal, but there are subtle clues that after hours, this is a gathering place for the strange underground cult called the Lost.

I got a call from Fusionette. She told me that she's fine, thanks to you. So I owe you for that. She also said that the Lost did have the tape, but now that some lost leader called Kurse has it. And then she told me that she's going to go get it by herself. Yeah, impulsive. She's in no shape to fight again, it's too soon. All I wanted was to find out what happened to my Dad. I didn't want her to get hurt doing it.

Thanks for helping. I know I can be kinda hard to get along with, but, ah, thanks.

Keep Fusionette from getting killed

Fusionette's gone after the tape of the battle with Faultline on her own, and she's gonna get herself killed. Look, you've already helped me out a lot, and this is a lot to ask of anyone, but you may be the only one who can help her!

'Nettie didn't tell me where she was going, but I've heard of this Kurse guy when I was investigating the Lost. I know where he often hangs out. I can show you where you need to go.

It feels like there was a battle here you just missed. But the sounds of power blasts in the distance tell you the battle's not over yet.

Arbiter Sands had a message for you after you defeated Kurse.

Fusionette's okay. Maybe she'll listen to her doctor next time. Anyway, I have to thank you for that. And now Arachnos is mixed up in all of this? I didn't know it was gonna be anything like this. I just don't know what to do, but this 'Nocturne' person has the only thing left that could tell me what happened to my father, and if Arachnos is interested, it's gotta be stopped, right?

You've done a lot to help me. Fusionette was my only friend for a long time. I'm glad that isn't true anymore. Thanks.

(OBJECTIVES: This isn't mentioned in the mission objectives, but liberate Arbiter Sands is required to finish this mission. Anyways, you'll need all the help you can get against Kurse.)

Stop Nocturne and get the tape

This next thing, it's pretty big. I don't know much about Arachnos, but I know enough to be worried that they'd want the tape of what happened to my Dad. I guess we're just lucky their infighting gave us a clue where it is now. If Arbiter Sands was telling the truth, then the Arachnos agent is about to make her getaway. Stopping her is the only chance left for me to find out what happened to my Dad, and for you to stop whatever Arachnos is up to. There might still be some time, so you might want to get some friends. This Nocturne the Night Widow sounds pretty tough.

According to Arbiter Sands, Nocturne is planning to take a route through the sewers to her pick-up point near the waterline. You'll have to stop her before she can escape, and probably take out her means of escape, too. Fusionette's still in the hospital after everything that's happened. I wish I could go with you myself, but... I'd just be a problem. I'm sorry. 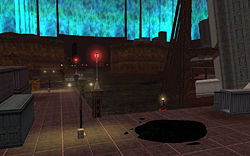 Arachnos! It turns your stomach to think of those butchers in Paragon City.

You defeated Nocturne the Night Widow and recovered the tape from Arachnos!

Did you watch it? With all that you've done, you deserve to. And you also deserve to hear the truth from me, too. You probably figured it out already. I said that I lost my Father when Faultline destroyed Overbrook with his earthquake devices. That's because my father was Faultline.

I don't really remember it, even now. I was just a kid, I didn't know my Dad was a villain! Just that he was my Dad, you know? It still doesn't make sense. I mean, Dad was always so nice. I have all these memories about him doing great things. And Earthquake devices? Dad had his old Faultbreaker suit, but it was only an amplifier. He was a mutant.

I've been afraid of what happened to him my whole life, afraid I'd do the same thing. Now I'll know. You saved my girl, and given me this. Thanks.