Difference between revisions of "Doc Delilah"

Agent G works for Longbow. I've heard tell that he's some sort of espionage agent, though I must confess that I don't know much more than that. He and I did speak a good deal about the history of the area when he first showed up, and I think it's because he just might have suspected something was wrong with the Faultline Incident, too. Well, he's been tracking Arachnos activity since he got here, and after this last run-in with Arbiter Sands, he asked me if he could talk to you.

Agent G already seems to know a lot about you. And if he's just half as impressed as I am, then I'd wager that what he needs your help for is something major.

Doctor Delilah Stein was born with herculean strength and incredible physical resistance. She fought evil as a heroine for a time, but eventually found her real calling: History and archeology. Now she combines her past life and her education into a new career as a chronicler of meta-human history, and an archaeologist of the unusual. Dr. Stein recently began investigating the lost hero bases in Overbrook, looking for clues to fill in the history of pre-Rikti War heroes and villains.

Well, hello there! Glad to see you made it out of that dust-up, too. I told Penelope I wanted to talk to you for a reason. Now, little Miss Yin told me all about what you've done for her and her Daddy, and I already knew that you were helping out Jim Temblor, that poor boy, so I know your heart's in the right place. I'm also guessing you just might have noticed that there's some awfully peculiar events going on around here. I came to Faultline to investigate the meta-human history of the area, but I've begun to think that we've gotten some of that history terribly wrong...

Now, I believe that the story we all know about the Faultline Incident has some holes in it, but I need evidence to prove it. That evidence has been scattered in caves and the ruins of old bases all around the zone back when the Faultline Incident happened, and I've been out here working to find just what I need. I'm pretty close to understanding what happened, but in order to put it all together, I need to find a better recording of the final battle with Faultline. I heard about the recording you found for Jimmy Temblor, but that's still incomplete. However, I may be able to find a better recording, with a bit of help. You see, because the forces of law and order haven't been able to patrol the area until recently, all sorts of villains have been scouring through my dig sites looking for valuables to scavenge and steal. That's why I need someone like you to help me.

I just knew you'd be willing to help! Now, here's my problem: I recently found out that one of the heroes who was at ground zero during the Faultline Incident just may have been recording what happened, and sent a record of it to his supergroup's old base. The poor man died in the event, but that recording just might still exist. As a hero, his name was AkashiKnight, and I think I've found where his body came to rest. But those Sky Raiders have figured out that wherever I try to excavate is also a good place for them to plunder, and now they've swooped down on the site. All I really need you to do is recover AkashiKnight's body, but if you wanted to teach those Sky Raiders some manners, I would not be put out by it.

A lot of things probably fell into these old caves when Faultline destroyed Overbrook.

You recovered the body of AkashiKnight.

I hope those Sky Raiders weren't too much trouble for you. Their leader in the area is a contemptuous fellow named Captain Castillo. He thinks he's some kind of suave air pirate. Would you believe that he tried to put 'the moves' on me? As if I would ever consider that! I know his type. I folded his jet-pack in a knot and told him never to bother me again, but I doubt even that's going to stop the Sky Raiders.

Oh, now look at me. I'm sorry for venting like that, but all of their heedless plundering is destroying a lot of history. Anyway, let's get back to work. I want to take a look at that body.

Poor AkashiKnight. His body is so well preserved, it's like he was mummified. I researched him a good deal. He really didn't deserve to end up like this, but at least he'll help us learn the truth. Confidentially, I think he would have wanted that. Now, the next step is to get the keys he mentioned from his old place of work. That building's still intact, so this shouldn't be to hard, right?

I know you will prove more than capable. I must say, I am impressed already with what you've done.

I've had AkashiKnight's body sent to the university, and we've got ourselves a pretty good idea of where he used to work. From the reminder he wrote himself, we can most likely find not only where his base was, but also a way in. I really wish I could go, but if I do those Sky Raiders will be there like flies on sugar, contaminating my site. So, I must ask you to go to AkashiKnight's old office and find his desk. Who knows what might be living in those ruins these days. I'd be ready for something dangerous, if I were you.

I can't go with you, but I'll still try to help by going to another site to distract the Sky Raiders. But do be careful, there may be other trouble at the sight. Like I said, be ready for anything.

His name was Leonard P. Conway. AkashiKnight, I mean. Time and again I keep seeing things like this, otherwise normal people who give their all to make a difference. Even when they meet sad ends, it still gives me a lot of faith in people.

Oh, I nearly forgot! There's a Longbow officer up in the dam who wants to talk with you. He's called Agent G. I talked to him some when he first showed up, and he seems nice enough sort, if a bit terse. Well, after you investigate that office, how about you head on up to the Dam and see what's on his mind?

Leonard P. Conway, aka AkashiKnight, once worked here. It kind of makes you reflect on your own life as a hero.

You found the cache, and drove off Arachnos!

Greetings. You can call me Agent G. I'm glad you brought this to me. It puts a name on our opponent: Arbiter Sands. We've been trying to find out why Arachnos is here, and what they're planning. Right now, allthat we know for certain is that they're having trouble with the Sky Raiders. It's slowed them down, but it's also made them tighten security, making it harder for us to find out what they're really up to. Hm. PCM? I wonder...

I'd suggest you keep working with Dr. Stein for the moment. She's trustworthy. She's also onto something I've suspected for some time. I may ask for your assistance later. If so, I'll send a message to your through her.

Thank you for your assistance.

Arachnos is mixed up in this? Well now, I should have known! I am so glad you spoke with that Agent G fellow. He's a good man, for a government type.

So this is AkashiKnight's cache? Let me see it. All of these things hidden in his desk. An entire hero's life and this is all that's left. Oh, well let's not get too gloomy. Leonard P. Conway did a lot of good in his life,and now this may help to save many other lives. And if I'm right, clear someone's name as well. We'll just have to get the proof before the Sky Raiders or Arachnos do.

This is all getting downright crazy, but it's not over yet. I am just greatly relieved that I have someone as dependable as you to help me.

I've put together all the clues you've recovered, and I do believe that I've found the location of AkashiKnight's old base! However, I'm afraid we're not the only ones. They Sky Raiders have figured out that there's something important in that building, and they're already on the way there. Hidden in that office building is the truth behind the Faultline Incident, but all those Sky Raiders see is a hidden base to plunder. You have got to stop them. I hope you are ready for this. A prize like an unplundered base might be enough to bring out one of their leaders.

What we're looking for is the recordings of the Faultline Incident that were transmitted to the old base here. According to the schematics, the base had enough power generators and battery storage to keep things running late into the next century. The Sky Raiders will probably already be on scene, so I've gone ahead and charted a boat so we can slip in without too much of a ruckus. And yes, I did say 'We.' I'm going, too. I feel a need for some field work, and if that Captain Castillo is there, I'd like a chance to show him what I think of him with a bit of jet-pack origami. I'll meet you there when you're ready. 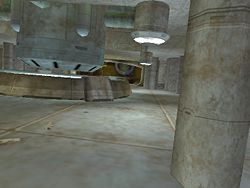 Doc Delilah is already on shore before the boat's even stopped. Hope she didn't get herself into too much trouble.

You found the tape after defeating Castillo!

Hey. You're lucky you caught me, Fusionette and I were gonna go and visit Blue Steel later. She talked me into getting my ID card. I can't be afraid of myself forever, you know? What's this? The full recording! I'm not sure I really want to see it, but... No. I need to.

I remember PsiCurse. Never knew why Dad worked with him.

I, I need to... Promise me. Promise me this: If that thing, that Psycho-thing, if it's still out there. Destroy it. You've got to destroy it!

Thank you. I needed to see that, needed to know. And I'm still going to see Blue Steel tonight. Now, more than every. Thank you. Thank you.

I had always entertained a suspicion that something was wrong with the whole story the Faultline Incident. Like why William Temblor was helping heroes like AkashiKnight and Blue Steel, even while they were fighting against him and his old partner PsiCurse. I had thought it might have been a multiple personality disorder, created by PsiCurse of course, but I hadn't entertained any notion of, well, of this. I suppose it makes a kind of sense, though. PsiCurse knew the changes he wanted to make, but he didn't know much at all about the details of Faultline's life such as the source of Mr. Temblor's powers, or his secret identity, or even about his son. So you see, he didn't know to change all of that, too.

It's going to be difficult to set the record straight on this, but you can just leave all that to me. I think you are going to have your hands full, very soon.